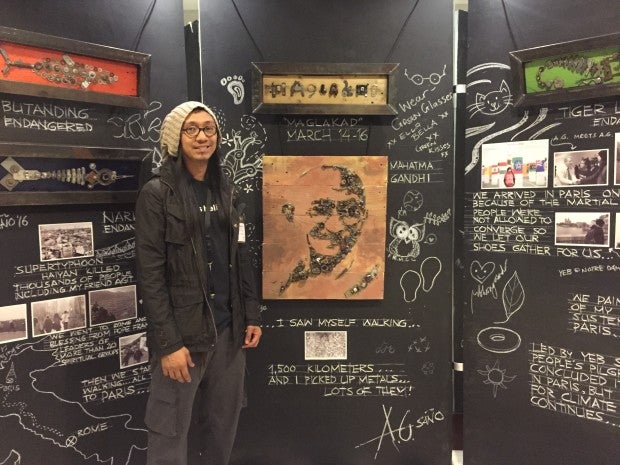 From dolphins to human figures, lumad to Yaya Dub as Mother Earth, AG Saño’s colorful murals have been helping sustain interest on the issue of climate change.

One of his latest creations is framed metal art, made from scrap items he salvaged while on a “People’s Pilgrimage” to Paris for the historic climate change negotiations last year.

Saño with other advocates of climate action walked for 40 days from Manila to Tacloban and another 60 days from Rome to Paris last year to convince leaders to come up with a legally binding agreement to address climate change.

When former US Vice President Al Gore visited the Philippines two weeks ago to train climate advocates, Saño gave a preview of his work.

READ: Al Gore to ‘climate warriors’: We only have years to make large change

The centerpiece of his small exhibit is a portrait of iconic Indian leader Mahatma Gandhi, made from bolts and screws and other metal pieces Saño picked up while walking from Manila to Tacloban, which was badly hit by Supertyphoon “Yolanda” (international name: Haiyan) in 2013. 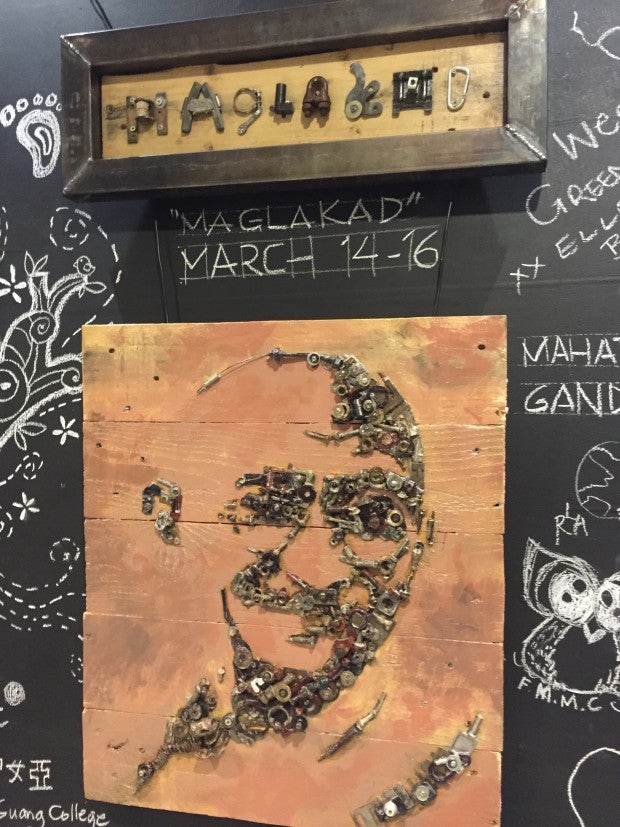 The highlight of the found objects art exhibit is a portrait of Indian leader Mahatma Gandhi. Above it is a sign that reads “maglakad” (walk), also made from scrap metal pieces.

“Mahatma Gandhi is the inspiration of myself and my brother and he was actually the model that we look up to when we walked from Manila to Tacloban because of his salt march, which was actually celebrated four days ago,” Saño told INQUIRER.net last March 16. He was referring to a nonviolent civil disobedience act led by Gandhi in 1930 to protest the taxation on salt production in India.

Saño was among the Filipino environmental activists who embarked on a 40-day walk from Manila to Tacloban and a 60-day pilgrimage from Rome to Paris last year. The one who led the group was his brother Yeb Saño, former climate change commissioner and now head of Greenpeace Southeast Asia.

Saño said he and his brother Yeb admired Gandhi because he was able to show that nonviolent acts such as fasting could “change society and the course of history” and “achieve great heights for any society.”

“We chose to do the walk on Oct. 2, 2014, which is Gandhi’s birthday. And we reached Tacloban Nov. 8, which is the first anniversary of Typhoon Haiyan,” he said of the first leg of their pilgrimage.

Saño said that even before he embarked on the pilgrimage, he advocated recycling and reusing old objects.

He said a friend, who was a leading antimining lawyer, inspired him. 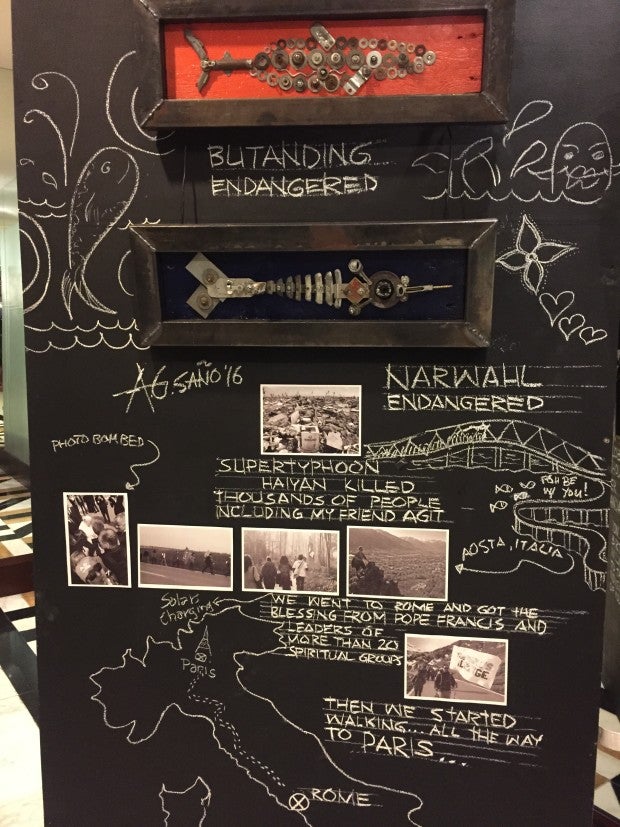 Some of AG Saño’s scrap metal creations include a “butanding” (whale shark) and a narwhal.

“He told me a lot of metals are out there. Imagine how many millions of (Nokia) 3210s or 5210s were used more than a decade ago. Where are those objects now? They’re just out there,” Saño said. “And we’re talking about tons and tons of metal that can stop us from extracting more if we harness these stuff. So we have the same sentiment about found objects or stuff that we can still reuse.”

Among the curiosities included in his preview exhibit last week at Sofitel Manila hotel were framed metal pieces shaped into endangered species. Displayed on three black panels filled with chalk drawings and photos were a butanding or whale shark, a narwhal, and a tiger lobster. Using chalk, Saño narrated their journey from Manila to Paris.

All the metals used for the endangered species were gathered while traveling in Europe. Saño said he had to bring home 10 kilos of cargo because of all the metal he collected.

He said it was not the first time that he started collecting scrap metal for art.

“I can’t go to the market or the hardware (store) and buy these metals. I have to walk another 1,000 kilometers to be able to do it. So that’s their value,” he said. 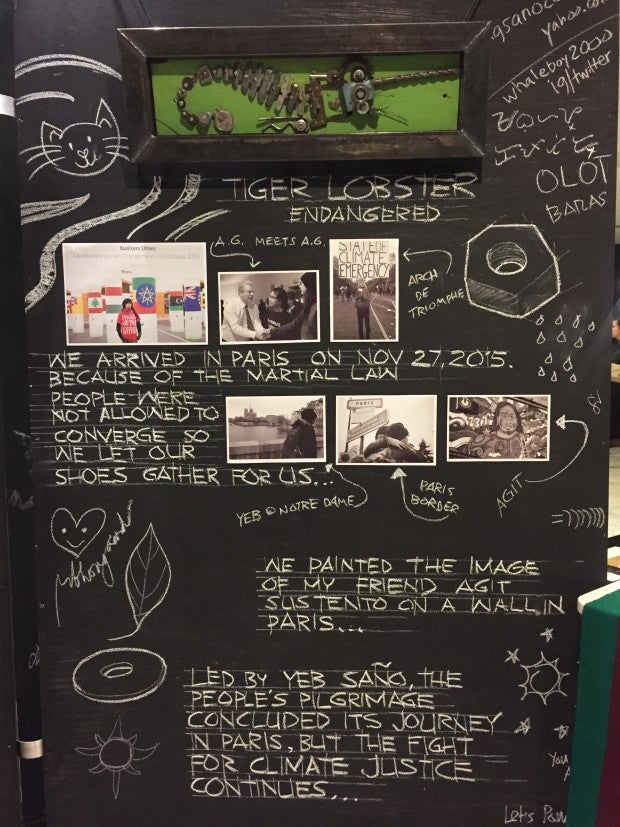 Surrounding the metal art shaped like a tiger lobster are chalk drawings and photos narrating Saño’s journey from Manila to Paris.

“And you get direct connection to the place where you got the metals. So it’s a high value art for me,” he added.

Saño explained that while his advocacy for climate action and the actual People’s Pilgrimage were not directly related to his metal art, they were “interdependent.”

“The message here is we don’t have to extract more metals,” Saño said. “We can fight this crisis by getting in touch with people.”

Saño said he had yet to work on two-thirds of the metals he salvaged from Europe last year. He plans to create more installations and exhibit the complete collection in June. RC