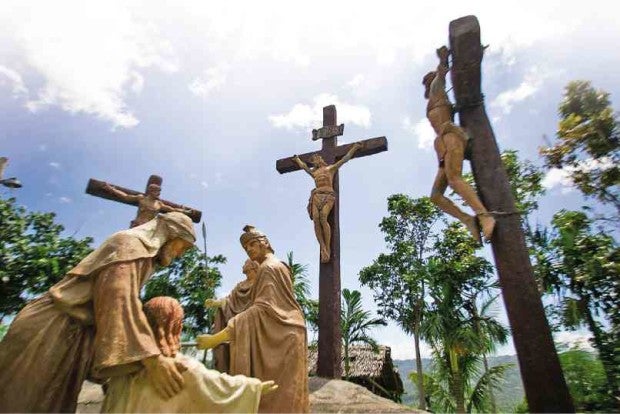 THE SUFFERING of Christ comes to life in Kawa-Kawa Hill in the village of Tuburan, Ligao City, Albay province, through life-size images that draw thousands of faithful and tourists to the site during Lent. MARK ALVIC ESPLANA

SISTER Trinidad Bunac, prioress of the Carmelite nuns of the Holy Trinity, can only offer a special prayer to repay what pilgrims have done to build a religious shrine at Kawa-Kawa Hill in the village of Tuburan in Ligao City in Albay province.

Pilgrims leave their footprints and handprints on tiles that would be used in sections of the shrine. More than 500 have donated various amounts for this project, Bunac said.

The tiles, with the donors’ names, would be used in a staircase around the church and would be placed on pathways leading to a 36.57-meter (120-foot) statue of Our Lady of Divine Mercy that will be made of stainless steel.

The shrine at Kawa-Kawa Hill features life-size sculptures of the 14 Stations of the Cross and is one of the most popular Lenten destinations in the province.

Bunac said that with the footprints and handprints in the shrine project, money had been raised to finance the ongoing construction of the church. “I am very thankful to our brothers and sisters for extending such financial assistance and in kind donations for the completion of the shrine,” she said.

Aside from the religious images in the area, pilgrims visit Kawa-Kawa Hill because of its serene environment. Pilgrims describe the hill as a place of healing and prayer.

Bunac is determined to finish the shrine by next year because through this, the nuns would bring people closer to God.

She credited Albay Rep. Fernando Gonzalez for sharing his property with the nuns and for contributing in the improvement and upkeep of the nature park.

Letizia Imperial, 78, who is based in Houston, Texas, said she felt blessed when she visited the shrine and donated to a worthy cause.

She said she had been supporting the nuns and their projects by selling rosaries and religious items to her friends in the United States. “Whatever funds I raised, I send to the sisters,” she said.

Erma Imperial, 69, who is based in Pennsylvania, Philadelphia, said she was impressed and touched when she saw the images comprising the Last Supper tableau at the shrine.

“I was amazed that the sculpture is almost similar to real characters,” said Imperial, whose footprints had been left on a tile that would soon become part of the shrine.

Read Next
Koko seeks clarity on fake land title mess
EDITORS' PICK
Geek out at TOYCON 2022 powered by Smart Signature
Unemployment rate up to 6% in May
Bye bye Boris: UK PM Johnson bows out with regrets but no apologies
House energy committee chair Arroyo bats for cheap electricity
High inflation: Your P1 is now worth only 87 centavos
High-risk pregnancy: Reducing your risk is in your hands
MOST READ
Suspect in grisly killing of missing woman in Bulacan arrested
Rafael Nadal suffers ‘seven millimeter’ tear to abdomen–report
FDA probes popular Filipino noodle brand for ‘high level of ethylene oxide’
Kim Atienza’s daughter flaunts bikini body in response to critics of her ‘revealing photos’
Don't miss out on the latest news and information.