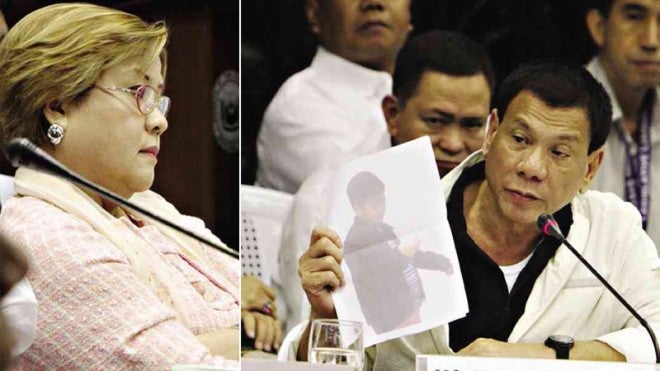 Reacting to Duterte’s statement during the second presidential debate in Cebu last Sunday, De Lima, who is running under a Liberal Party-led coalition, trumpeted the supposed institutional reforms in the state penitentiary that she initiated when she was DOJ chief.

“Rather than peddling lies and hurling baseless attacks, Mayor Duterte will be better appreciated if he can present a better proposal for improving our correctional system and sustaining the reforms,” De Lima said in a statement.

“It is not true that the Aquino administration did not do anything in fixing the correctional system,” she added.

In the second debate sanctioned by the Commission on Elections at the University of the Philippines Cebu, the tough-talking Duterte accused the government of allowing syndicates to manufacture illegal drugs in the Bilibid.

“This administration allowed shabu to be cooked inside a national penitentiary.  Is that your performance?” Duterte prodded rival Manuel “Mar” Roxas II.

Trying to prove her point, De Lima cited “Oplan Galugad” which she started as DOJ chief that “set a trend in curbing corruption in the state prisons.”

“Given the number of times Oplan Galugad was conducted, it should be clear to everyone that there is no shabu laboratory at the NBP,” De Lima said. “During my term as DOJ Secretary, we instituted reforms in the correctional system. I personally went to the NBP to crack down on these illegal activities.”

“We also demolished the kubols (private quarters) they set up. We then had a new security facility for these high profile inmates,” she added.

De Lima, who also served as chair of the Commission on Human Rights, admitted that corruption remains to be the culprit behind drug trade and other problems hounding the NBP.

“Other reforms are still on the way and I intend to fill some of these gaps in the legislature,” De Lima said, adding that she also proposed to build a new correctional facility in Nueva Ecija.

De Lima previously said she will fight Duterte’s presidential bid if he continues his iron-fist style of leadership and approach to crime.  As head of DOJ, De Lima initiated the investigation on reports about the existence of an alleged Davao Death Squad, to which the local executive has been linked. IDL

De Lima on Duterte’s cussing: Is he serious? Nakakahiya!