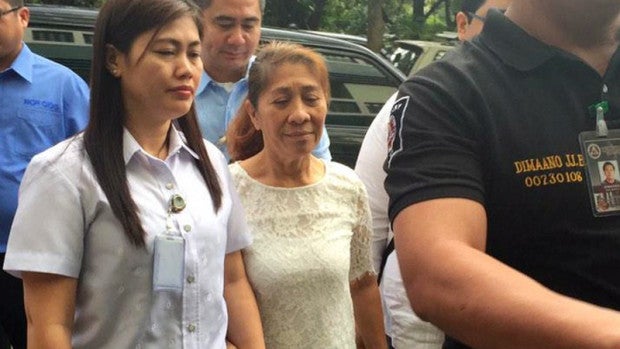 Dismissed Masbate Governor Rizalina Lanete on Wednesday has urged the Sandiganbayan to grant her bail plea because she is not a flight risk, owing to her reelection bid in the upcoming May polls.

Lanete through her lawyers said she is not a flight risk.

“Accused Lanete wishes to bring to the attention of this Honorable Court the fact that on Oct. 14, 2015, she filed her certificate of candidacy [at] the Commission on Elections. Accused Lanete is running for reelection (third term) for the position of [governor] of the province of Masbate,” her motion read.

“The fact that accused Lanete is running for reelection further reduces the already minimal risk of her fleeing. She has every intention of staying in the Philippines to serve her beloved Masbateños and to face the charges against her,” it added.

Lanete filed her candidacy although Ombudsman Conchita Carpio-Morales sacked her from public office and perpetually barred her from government service after finding her guilty of grave misconduct, serious dishonesty and conduct prejudicial to the best interest of the service.

Lanete is detained at Camp Bagong Diwa in Taguig City for plunder over allegations that she received P108 million in commissions from accused pork barrel scam mastermind Janet Lim-Napoles in connection with the alleged scheme of using her Priority Development Assistance Funds (PDAF) for ghost projects and kickbacks.

In its indictment, the Ombudsman said “Lanete continuously endorsed the implementation of her PDAF-funded livelihood and agricultural projects to questionable NGOs (non-government organizations) associated with or controlled by Napoles.” RAM