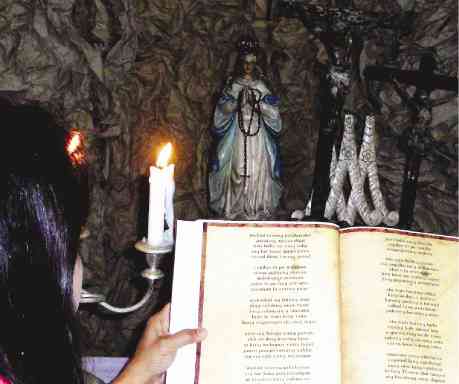 REAL-LIFE crucifixion and flagellation are not the only unconventional Holy Week traditions in the City of San Fernando, the Pampanga capital.

There is also the clandestine singing of the “Pasyung Malutu (Red Passion or Passion of the Workers)” by surviving Huks or their sympathizers among old farmers.

Published in 1936 by Dallosa Press in Manila and banned during the Quezon administration for having lyrics that criticized capitalism, abusive landlords, corrupt officials and immoral priests, Lino Gopez Dizon’s subversive version of the traditional “pabasa” on the redemption story of Jesus Christ is now 79 years old.

“The pasyon is very popular. It is sung during the Lenten season. Dizon used the same form, language and tunes to make a sort of last laugh on the excesses then of the Catholic Church and government,” said Robby Tantingco, CKS executive director.

The late Hukbalahap leader Luis Taruc, a comrade of Dizon in the Aguman ding Maldang Talapagobra (AMT) or Union of the Toiling Masses, wrote:

“A powerful orator and one of the greatest Pampango poets, Lino Dizon only reached the third grade in school. He was a people’s poet … . He was the author of a Passion play called ‘The Passion of the Workers.’ The barrio people were so fond of it that they preferred it to the regular Passion play, or when the regular Passion was held, Dizon’s ‘The Passion of the Workers’ was [performed] along with it.”

Dizon emerged important in the education of the masses. His capture and killing by the Japanese in May 1942 classified Dizon as a “major casualty,” Taruc said in his book “Born of the People.”

Pedro Abad Santos, the elder brother of freedom martyr Chief Justice Jose Abad Santos, organized the AMT in 1933 or a year after he founded the Socialist Party of the Philippines (SPP). Dizon was from San Fernando where the party founder lived.

The Filipino’s religious passion was always revolutionary because it made up for the absence of the Bible (which the Spanish colonial government had not published nor translated in local languages in its more than 300 years of rule).

A copy was difficult to find because, according to Maceda, anyone caught with the book was arrested. Maceda recovered her copy from a relative of Armando Baluyot, who was a friend of Dizon and publisher of the oldest Central Luzon newsweekly, The Voice, during researches conducted in 1985 and 1986.

CKS got its copy, in mimeographed and typewritten form, from the UP Library.

The opening stanza presents Christ as a socialist:

(Since at birth and

as a grown up

Even up to his death

Our Lord was known

To be truly a Socialist).”

(Because of your system

Praising in a verse the 1896 Filipino revolution against Spain, Dizon called for an armed uprising, saying:

(As the rich are the source

of hunger and chaos

We the poor must wake up

Cause the fall of the rich

In Dizon’s pasyon, “workers became the new Christ who bore the cross of poverty and who needed to unite to fight capitalism,” according to a review by Gregorio V. Bituin Jr.

Ronquillo, 18, who learned how to sing the pasyon from his grandmother, said Dizon’s work revealed so much about the conditions of the 1930s.

Tantingco said, “At the height of government crackdowns on socialists before the war and on communists after the war, peasants in the countryside continued chanting the traditional pabasa but used the lyrics of the Pasion ding Talapagobra to avoid detection by the military.”

In several verses, Dizon revealed he remained faithful to the original teachings of Christ. Tonette Orejas