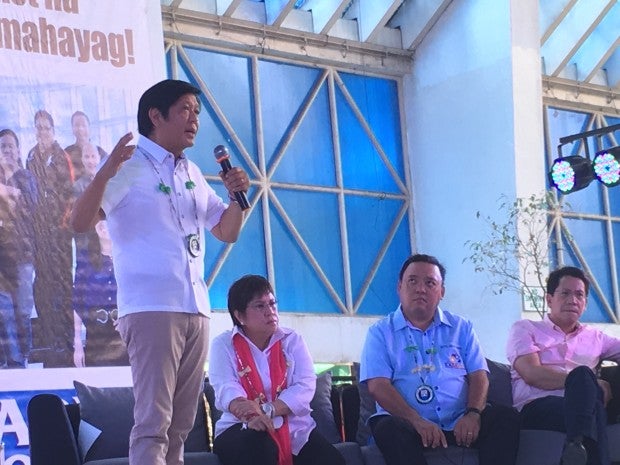 (Updated) OLONGAPO CITY—Four candidates vying for national positions were one in saying that a business-driven infrastructure and a business climate that supports the private sector’s needs, not only confined in Metro Manila, are needed to generate more jobs in the country.

Marcos lamented that about 5,000 Filipinos have had to leave the country every day to search for jobs abroad.

The son and namesake of the late dictator said infrastructure was not only about building roads and bridges, but also establishing training centers for workers and improving the Internet system.

Echoing Marcos, senatorial aspirant and lawyer Lorna Kapunan said the problem with the Philippines was the high cost of doing business, adding that government should conduct short-term, midterm, and long-term economic planning.

Pasig City Representative Roman Romulo, who is also vying for a Senate post, said industrialization and development are metrocentric, noting that business must also flourish in the provinces outside Metro Manila.

Lawyer Harry Roque, who is running for party-list representative, urged the government to expand its conditional cash transfer program by training Filipinos for their livelihood.

The Radyo Inquirer Issues Forum was created to provide voters more information on the different views of candidates on different issues and how they would address these issues, if elected. Its first ever forum will air on DZIQ-990khz on Wednesday, March 23, at 9:30 AM with a replay at 7:00 PM. JE

More US firms raring to invest in PH