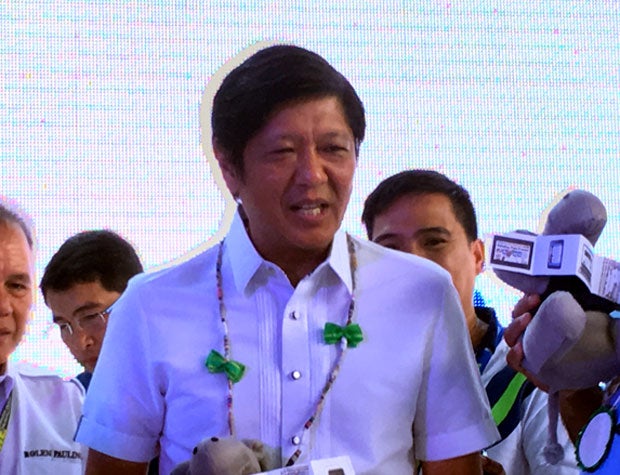 OLONGAPO CITY—Considering his popularity as reflected in recent preference surveys, why did not vice presidential candidate Sen. Ferdinand “Bongbong” Marcos Jr. vie for the presidency in the upcoming May elections?

This was one of the questions posed to Marcos during the first Radyo Inquirer “Issues Forum” here on Tuesday.

However, amid his good numbers, the son and namesake of the late dictator said he believes that being elected to the highest position in the land is a matter of “destiny.”

“Sa aking palagay, ang pagkapangulo, ‘yan ay destiny (I think the presidency is a matter of destiny). Tapat ang aking paniniwala, at sa aking pag-iisip, pag-aaral at pagdarasal para humingi ng gabay, palagay ko (I firmly believe, guided by my thoughts, research and prayer to ask for guidance, that) destiny has other plans for me this elections,” Marcos told locals, the media and supporters at the Rizal Triangle Multipurpose Center in this city.

Marcos, the running mate of Sen. Miriam Defensor-Santiago, said he would answer the question on gunning for the presidency “at the right time.”

(I think I will answer my gunning for the presidency at the right time.)

Marcos’ mother, former first lady and now Ilocos Norte Representative Imelda Marcos, previously expressed her disappointment that her son was aiming only for the vice presidency.