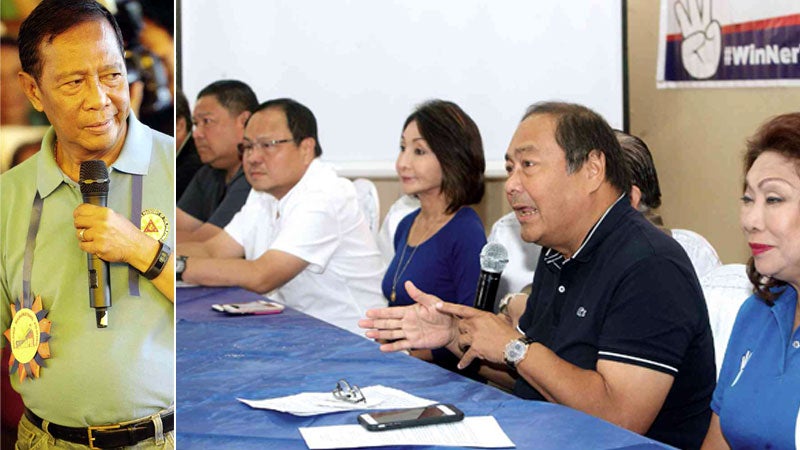 CEBU CITY—Accused of infidelity and “cavorting” with the enemy, Vice President Jejomar Binay’s purported “marriage of convenience” with one of the influential Cebuano families fell apart Monday.

One Cebu, a political party of the Garcias which controls three of the seven districts in Cebu province, announced Monday it was withdrawing support from Binay’s United Nationalist Alliance (UNA) in his campaign for the presidency in the May 9 elections.

Winston Garcia, gubernatorial candidate of One Cebu, told a news conference that UNA’s failure to treat One Cebu as equal prompted the breakup of the alliance that was launched just on Feb. 16.

“Right from the outset, UNA regarded the alliance as nothing more than a marriage of convenience,” he said

“Without prior notice or consultation with One Cebu, UNA has been doing sorties in various areas in the province of Cebu on its own. Worse, the people of UNA have been cavorting with the opponents of our local candidates, thus, sowing disunity, discord and confusion,” he said.

Binay said he respected the decision of One Cebu although he remained optimistic that the two parties would be able to resolve their differences.

“There are gains and losses,” he replied when asked at a news conference here how the breakup would affect his campaign in the region.

Down to one mayor

But without the help of One Cebu, Binay may have difficulty gaining ground in the province with a voting population of more than 2 million.

Garcia said One Cebu entered into an alliance with UNA believing that the two parties would be treated as equals. But, he added, UNA treated One Cebu like how “Imperial Manila” treated the country—“without respect.”

He lamented that several UNA activities were conducted in Cebu without even informing One Cebu. He cited the scheduled rally of UNA on Monday in Lapu-Lapu City where UNA did not even invite One Cebu officials.

Garcia said no decision had yet been made on whom the party would support as presidential candidate. One option was to go for a free zone and just allow their members to support the candidate of their choosing.

There was speculation that One Cebu would back the presidential bid of Davao City Mayor Rodrigo Duterte, a strong contender here due to his roots in Cebu.

Sources said One Cebu would not go for Sen. Grace Poe because she was being supported by the local party, Bakud, of the Duranos who was backing the reelection bid of Garcia’s opponent “Gov. Hilario Davide III.

Despite the breakup of the alliance, Garcia said One Cebu members would still maintain a good relationship with Binay although they could no longer work with the party.

“It’s just that I do not think One Cebu-UNA as a party can work hand in hand here in Cebu. They have other things, other priorities that might clash with One Cebu. That’s why we decided to break this alliance,” he said.

“We cannot agree with their strategy just to make Binay win,” he added.  “They can now do whatever they want in Cebu without the constraint of coordinating with One Cebu.”

She, however, said this would not mean that she would bolt out of UNA of which she is a member.  “I am not bolting the party unless the party will be disloyal to me,” she told reporters.

Binay, in a separate press conference, said he and Winston Garcia had not talked although he remains optimistic that the two would reconcile especially since Gwen Garcia would remain an UNA member.

He denied reports that he and Garcia argued over the phone on Friday night, saying he was busy preparing for the debate on Sunday.

Asked if he would support another gubernatorial candidate, Binay said he would have to talk to his party since he only learned about Garcia’s announcement.

He said the breakup of the alliance would not affect his plans for Cebu should he win the presidency.

“But let me just assure you, people of Cebu, that I will pursue the promises and commitments I made when I become President. First, I will establish a Malacañang in Cebu,” he said.

He added he would be supporting projects to make Cebu more competitive.

The Vice President previously said during the covenant signing between UNA and One Cebu that he would give the province priority in the allocation of infrastructure and development projects.

“Under my presidency, each region and province will have funding for at least one mega project per year. And we will start here in Cebu,” Binay said in February.