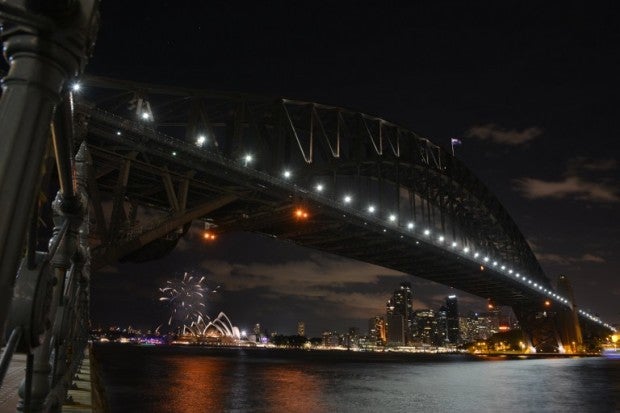 In this March 28, 2015, photo, fireworks fade as lights go out on the Sydney Harbour Bridge and Opera House to signal the start of the Earth Hour environmental campaign. Lights will go out again this year in 178 countries to raise awareness of the need for sustainable energy use and demand action to halt planet-harming climate change. AFP

SYDNEY—Australia’s iconic Sydney Opera House and Harbour Bridge went dark on Saturday night, as the Earth Hour campaign to switch off lights to call for action on climate change began rolling out across the planet, organizers said.

Millions of people from 178 countries and territories are expected to take part in WWF’s Earth Hour this year, with monuments and buildings such as the Eiffel Tower, Taipei 101 and the Empire State Building plunging into darkness for 60 minutes from 8:30 p.m. local time.

In Sydney, where the Earth Hour idea originated in 2007, many harborside buildings fell dark as the city switched off for the tenth year in a row.

“We just saw the Sydney Harbour Bridge switch its lights off … and buildings around as well,” Earth Hour’s Australia manager Sam Webb told AFP from The Rocks area.

Earth Hour’s global executive director Siddarth Das said organizers were excited about how much the movement had grown since it began in Sydney in 2007.

“From one city it has now grown to over 178 countries and territories and over 7,000 cities so we couldn’t be happier about how millions of people across the world are coming together for climate action,” he told AFP via telephone from Singapore ahead of the lights out.

Das said momentum towards climate action was building in the wake of the global climate talks in Paris last year.

The so-called Paris Agreement sets the goal of limiting global warming to “well below” two degrees Celsius (3.6 degrees Fahrenheit) over pre-industrial levels, with a more ambitious target of 1.5 C if possible.

“No one is denying the fact that the world is at a climate crossroads, but while we are seeing more and more impacts of climate change we are also witnessing a completely new momentum in climate action that is transcending borders and generations,” he said.

“I feel that there’s a renewed vigor among individuals and governments to come together for strong climate action and to fight climate change.”

Das said Earth Hour organizers did not collect global statistics on the energy conserved during the 60-minute blackout and that the event has always had symbolic intent, saying it was more a moment of global solidarity about a global problem.