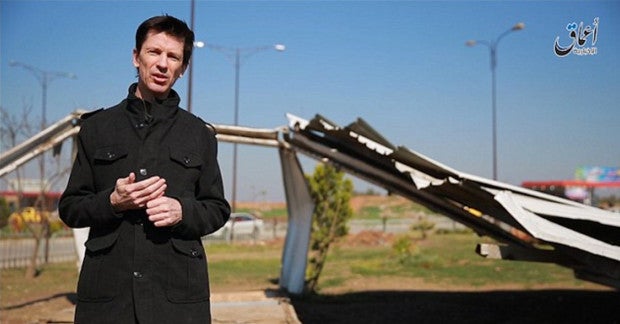 This photo posted online by the Islamic State group-affiliated Amaq News Agency on March 18 shows British journalist John Cantlie, who is being held hostage by the militants, during a stand-up for an IS propaganda video in Mosul, Iraq. AP

It is the first video featuring John Cantlie to be released by IS since February 2015, when he appeared in what he said was Syria’s Aleppo province.

The latest video was released by the IS-affiliated Aamaq news agency Saturday. In it, Cantlie is seen mocking US airstrikes on IS media kiosks. IS has long used Cantlie for propaganda purposes, featuring him in videos from Mosul, Aleppo and the Syrian town of Kobani, likely speaking under duress.

Cantlie has worked for several publications, including The Sunday Times, The Sun and The Sunday Telegraph, and was kidnapped with American journalist James Foley in November 2012. IS beheaded Foley in August 2014.