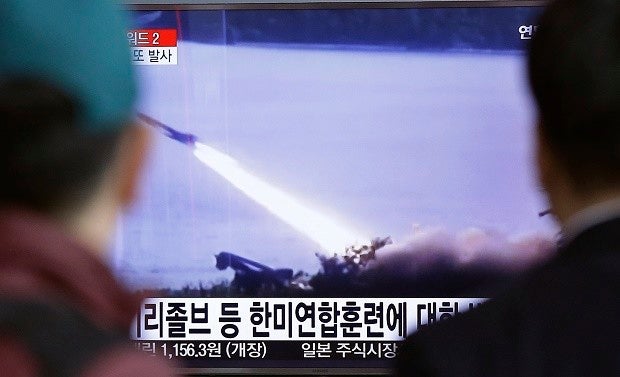 People watch a TV screen showing a file footage of a missile launch conducted by North Korea, at Seoul Railway Station in Seoul, South Korea, Friday, March 18, 2016. North Korea defied U.N. resolutions by firing a medium-range ballistic missile into the sea on Friday, Seoul and Washington officials said, days after its leader Kim Jong Un ordered weapons tests linked to its pursuit of a long-range nuclear missile capable of reaching the U.S. mainland. The letters on the screen read ” North Korea fired a missile against the ongoing joint military exercises,dubbed Key Resolve and Foal Eagle, between South Korea and the United States.: AP

A unanimous statement from the UN’s most powerful body Friday evening after an urgent meeting called by the United States reiterated its demand that North Korea comply with council resolutions prohibiting all ballistic missile activity.

The council expressed “grave concern” at North Korea’s reaction to the resolution adopted unanimously two weeks ago that imposed the toughest sanctions on Kim Jong Un’s government in response to its nuclear test in January and rocket launch in February.

In light of the North’s ballistic missile launches on March 18 and March 10, the council urged all countries “to redouble their efforts” to implement all sanctions against the country.