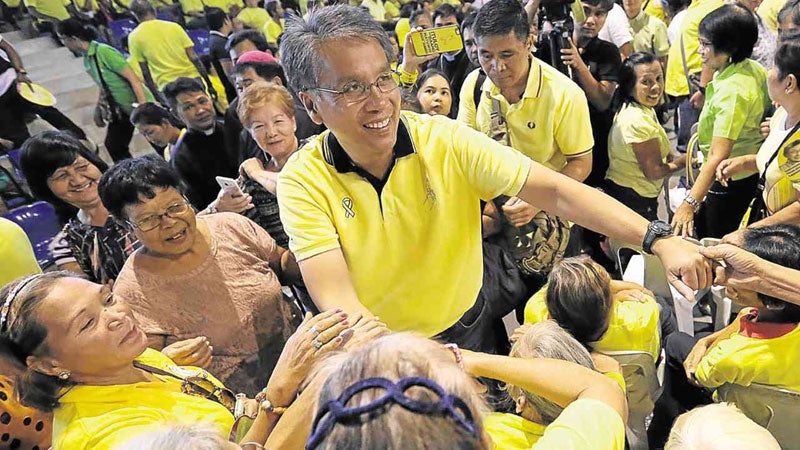 THE LIBERAL Party’s erstwhile power broker in Visayas, Negros Occidental Rep. Alfredo “Albee” Benitez, has declared his support for presidential bet Sen. Grace Poe and running mate Sen. Francis “Chiz” Escudero along with roughly 40 other representatives in what he says is the first wave of shifting political alliances in the 2016 campaign.

Benitez, who filed as an independent in his run for his third and final term, said 30 party-list members have officially committed to join him in his support for Poe-Escudero.

“Based on their 2013 election results, they can deliver as many as 10 million votes to Grace and Chiz,” said Benitez.

Spur of the moment

“This was just a spur-of-the-moment [decision]. We didn’t plan on doing this. I just asked them who wants to join a rally in Bacolod where I will officially announce my support for Grace and Chiz,” said Benitez, who noted that the party-list groups had been talking among themselves in the past few months on who to support.

Poe said the support of the representatives were crucial because they were directly linked to their districts and the party-list had ties to special advocacy groups.

“I think they represent a major force but we are still waiting for others. They have expressed support but have yet to make public declarations for reasons of their own. Whatever it is, we respect that and we will just wait for them to come out,” said Poe.

Ilolio Rep. Jerry Trenas of the LP, Benitez’s ally in the Visayas bloc, said he respected his former ally but his decision would not affect the province’s vote which he expected would stand solidly behind Roxas and vice presidential bet Leni Robredo.

Benitez said the 9-6 decision of the Supreme Court declaring Poe fit to run for president prompted them to come out in the open to declare their support without fearing any retaliation from major allies.

“I just hope that they won’t take it against me for supporting the other side,” said Benitez on threats of retaliation from the administration side.

Benitez said he didn’t make a mistake in choosing Poe and Escudero based on the “warm and overwhelming” response of the crowd during their initial sorties at San Carlos and Isabela. Benitez said allies in the “Love Negros” coalition accompanied Team Galing at Puso in its sorties.