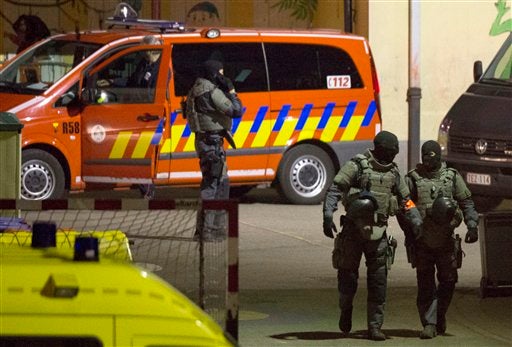 Special operations police walk in an area during a police raid in the Molenbeek neighbourhood of Brussels, Belgium on Friday, March 18, 2016. Two French police officials have told The Associated Press that Salah Abdeslam, the main fugitive from Islamic extremist attacks in Paris in November, has been arrested in Belgium’s capital after four months at large. He was arrested Friday in a major police operation in the Brussels neighborhood of Molenbeek. (AP Photo/Geoffrey Van der Hasselt)

PARIS — Beardless, with short-cropped hair and a mild manner, Salah Abdeslam slipped from one world to another as easily as he slipped for four months through an international dragnet.

The fugitive who evaded several close calls with police — until he was caught Friday in the neighborhood where he grew up — remains perhaps the biggest mystery among the cohort of men who brazenly attacked Paris cafes and restaurants, a noted concert hall and France’s main sports stadium on Nov. 13, killing 130 people.

He is thought to have served as the logistics man, renting rooms, shopping for detonators and driving at least one of the killers from Brussels to Paris. It remains unclear whether he was meant to become an attacker himself, as a suicide bomber, and whether he was a chameleon or a coward.

Abdeslam, 26, is a French citizen who lived in the Molenbeek neighborhood of Brussels, the low-income quarter of mainly Moroccan immigrant families and home to most of the at least nine attackers.

He lost one of his two brothers, Brahim, who blew himself up, and his childhood friend Abdelhamid Abaaoud, the suspected ringleader of the bloodbath.

Four days after the attacks, Mohamed Abdeslam, the third brother, said the three siblings grew up normally, seemingly content with life in Europe.

“We are an open-minded family. We never had any problems with justice,” he said. “You have to understand that we have a family, we have a mom and he remains her child.”

Brothers Brahim and Salah ran a family cafe in Molenbeek — which police closed down not long before the attacks on suspicion of drug dealing there. The cafe served alcohol, forbidden in the Muslim religion, but that clearly posed no problem for the two young men. Just like the partying that Brahim’s friends told The Associated Press their friend did, and reports said Salah did, too.

But since the attacks, Abdeslam was a man on the run who left a trail of unanswered questions in his wake and shown by his absence that he could outwit the biggest manhunt in Europe.

Abdeslam strangely called his contacts in Brussels to come to Paris and fetch him after the attacks, apparently stranded in a southern suburb of the French capital. On their return the following day, the group managed to get through a police checkpoint after a standard stop. Some Belgian media reported that Abdeslam was smuggled out of a house in Molenbeek two days after the attacks under the noses of police — a report never proven. “All we know is that when we came, he wasn’t there,” Belgian prosecutor Eric Van der Sypt said recently.

Abdeslam was registered in the Schengen information system on suspicion of unidentified criminal activity. But when he was stopped four days before the attacks at a routine traffic check as he drove and two companions drove from Germany to Austria, the group was waved on their way after saying they were heading to Vienna for a vacation.

Abdeslam clearly slipped from role to role with ease, seamlessly orchestrating transitions from regular neighborhood guy to the logistician behind the Muslim extremist attacks. But he may have missed a beat. A suicide vest was found near where his cell phone was last detected in Montrouge — where he awaited a rescue by friends. And the Clio he drove to Paris with some attackers was found abandoned in northern Paris, in a district the Islamic State group said in its claim of responsibility that an attack had occurred. It never did.

In January, the Islamic State group published an online photo tribute to the extremists who killed in Paris. But someone was missing from the photo display of in Dabiq, the IS propaganda magazine: Abdeslam. Belgian jihadi watcher Pieter van Ostaeyen said this may be due to IS’s desire to honor only those extremists slain as martyrs. TVJ