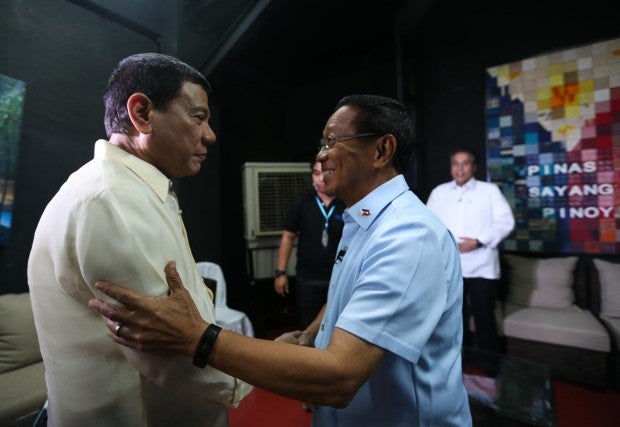 Could the professed crime buster have committed crime himself?

Davao City Mayor and presidential candidate Rodrigo Duterte may be liable for technical malversation after the Commission on Audit (COA) found alleged “irregularities” in disbursements of P45.819 million out of the city’s Special Education Fund (SEF), the United Nationalist Alliance (UNA) said on Friday.

The UNA, whose standard-bearer Vice President Jejomar Binay is facing a string of graft and corruption charges over projects during his time as Makati City Mayor, said its stalwart’s rival had allowed questionable use of the SEF under his watch.

“If he really were tough on crime and corruption as he projects himself to be, why were there anomalies under his watch?” said UNA spokesperson Mon Ilagan in a statement.

“For someone promising to clean up the entire country within six months, why can’t he ensure the proper use of funds in his city?” he said.

Duterte, who overtook Binay and landed second place in the latest presidential poll, challenged the Vice President and COA to show proof of allegations that he had misused funds in Davao City.

“I am not Binay, I do not steal,” Duterte said, replying to Binay’s statement questioning his crusade against crime. “If he can show proof that I stole a single centavo from Davao, he can accompany me to the Commission on Elections tomorrow and I will withdraw my candidacy.”

He posed the same challenge to COA.

In its executive summary, COA cited disbursements on plane fares and accident insurance for coaches and students, fuel for various vehicles, insurance premiums for vehicles, groceries, medical supplies, and payments for power, water and telephone bills—expenses that should fall under maintenance and other operating expenses (MOOE).

The law only allows SEF to be used for extra classes for incoming first graders, improvement of elementary schools, procurement of textbooks and teaching materials, teachers’ salaries, purchase and repairs of vocational and laboratory equipment, research and scholarship grants, and the promotion of physical education.

Pete Lavinia, spokesperson for the Duterte camp, described the UNA statement as a “desperate move” on the part of the Vice President.

“They want to escape the burning allegations of massive corruption hurled against Binay and are now attempting to paint everyone black out of its desperation,” Lavinia said.

He added the SEF issue had been raised and clarified.

“There is nothing new here. This is an old information made to appear fresh. I would say, this is a worthless piece of information. But, really, nice try,” he said.

He spared Sen. Miriam Defensor-Santiago, whom he earlier described as his best friend. With a report from Nico Alconaba, Inquirer Mindanao