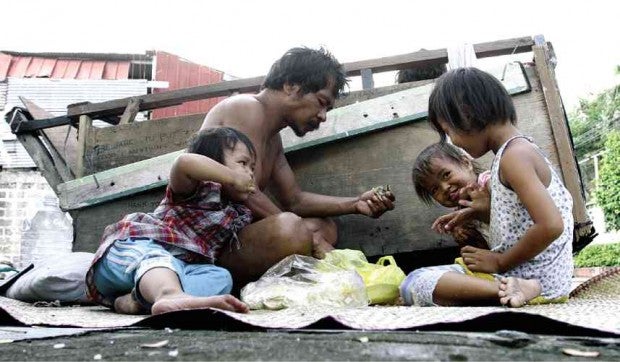 STILL POOR A homeless family shares a meager meal on the streets of the city. Despite improvements in the country’s economic indicators, more than 26 million Filipinos remain poor, with about 12 million living in extreme poverty. INQUIRER FILE PHOTO

More than 26 million Filipinos remain poor with almost half, or a little more than 12 million, living in extreme poverty and lacking the means to feed themselves, according to official government statistics for the first semester of 2015.

The figures, however, reflect slight improvements from the same period in 2012, two years after President Benigno Aquino III assumed power, as well as in 2009 and 2006, under the Gloria Macapagal-Arroyo presidency.

“The statistics are actually good. Yes, we can be happy about it,” said Rosemarie Edillon, acting deputy director of the National Economic and Development Authority.

She said it was a sign that economic growth was trickling down to lower-income families, helping bridge the wealth disparities between the rich and the poor.

The economy has been growing at an average of 6 percent under the Aquino administration.

“We have attributed this first to fast-rising incomes,” Edillon said. “The incomes of the bottom 30 percent have actually improved the fastest. That means that inequality is actually being reduced as well.”

In the first three months of 2015, 26.3 percent of Filipinos were found to be living below the poverty line, a measure of the minimum income required to meet basic food and nonfood needs, the Philippine Statistics Authority (PSA) said in a briefing on Friday.

This translates to about 26.48 million Filipinos, based on the Philippine population in 2015 of 100.7 million.

The 2015 survey also found that 12.1 percent of the population—roughly 12.18 million Filipinos—are living in subsistence or extreme poverty, meaning their earnings are not enough for them to eat three square meals a day.

Edillon said the government’s 4Ps, or conditional cash transfer program, has helped a great deal in reducing poverty, providing safety nets to families which otherwise would not have the opportunity to send their children to school.

“As you know the 4PS program does not really intend to reduce poverty in the long term because the amount of transfer is only about 20 percent. And for 2015, [it’s targeting] only 15 percent of people below the poverty line. It’s only pantawid (to help tide them over),” she said.

But the program “provides social protection because it provides regularity of income stream, so you know that month after month, you will receive this amount of cash,” she said.

Some of the poorest regions, however, appear to be in dire need of more intervention.

The Autonomous Region in Muslim Mindanao (ARMM) had the highest proportion of the poor, who comprised 59 percent of the ARMM population in 2015.

Almost a third of ARMM residents, or 30.1 percent, were living in extreme poverty, the survey showed.

The trend on both indicators in the conflict-ridden and economically stunted region has risen dramatically over the years.

By contrast, Metro Manila had the lowest proportion of the poor, in spite of the heavy presence of urban poor.

The capital region only had 6.5 percent of the population below the poverty line, although its share has been on the rise as well, from just

According to the PSA, the national poverty threshold in 2015 stood at P10,969 per month, meaning a family of five needed to earn that much to be able to eat, have shelter, travel, buy medicine, or go to school, among other life necessities.

On the other hand, the national food threshold was P7,638 per month—the requirement for a family to be able to have regular meals.

It is important to note that the poverty and food thresholds are averages, and the actual numbers vary from region to region.

For example, the poverty threshold in Metro Manila is highest at P12,517 per month, and lowest in Mimaropa (Mindoro, Marinduque, Romblon and Palawan) at P10,097.

The same trend holds true in food threshold. Metro Manila has the biggest income requirement at P8,741 per month, and Mimaropa, the smallest at P7,051 per month.

The two-phase survey is taken every three years, with the first phase in July and the second in January of the following year. The full report, including the findings from the second survey, is made available in the fourth quarter. TVJ