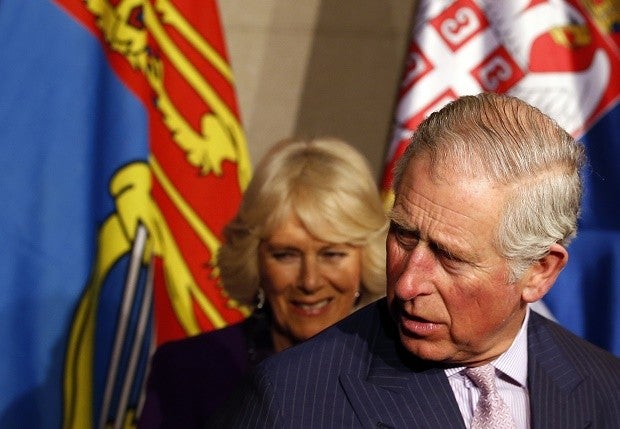 Britain’s Prince Charles and Camilla, Duchess of Cornwall arrive in the Serbian parliament building in Belgrade, Serbia, Thursday, March 17, 2016. The royal couple is on official visits to Croatia, Serbia, Montenegro and Kosovo. AP

BELGRADE, Serbia — Britain’s Prince Charles called Thursday for reconciliation in the postwar Balkans, urging the region’s many nations to work for peace and not become prisoners of their turbulent history.

Charles said that while peace and stability have returned to the Balkans after the 1990s’ ethnic wars, more needs to be done in order to preserve the momentum of peace.

“Every society and country is molded by its past, but there can be few places on Earth where one feels the weight of history more than in the Balkans,” he said. “No one should forget or ignore that history but, even more importantly, it is important not to become prisoners of it.”

Speaking in the Serbian capital on St. Patrick’s Day, Charles evoked the 1979 death of his uncle Lord Mountbatten, who was killed by an IRA bomb on a boat off the west coast of Ireland, along with his grandson.

“I feel, therefore, that I have at least some understanding, through my own experience, of the heart-rending anguish that so many families in this region, of whatever nationality, race or religion, have experienced through the loss of loved ones,” he said.

“But after many years of reflection and, indeed, despair at the pointless cruelty and destruction we witness around the world, my own conclusion is this: that only reconciliation offers the assurance that our children and grandchildren will not suffer the same agonies as our generation,” Charles said.

He said the peace agreement in Ireland in 1998 changed “immeasurably” the lives of the people in both communities there.

“It is my profound hope that the countries of the Western Balkans will be similarly changed by your quest for enduring peace,” he said.

More than 100,000 people were killed and 1 million were displaced during the war that erupted after the breakup of the former Yugoslav federation. Tensions have been simmering although Balkan countries have improved relations as they seek to join the European Union.

Charles says that “reconciliation requires the commitment of everyone, from the leaders of states and faiths to the ordinary people in their towns and villages.” He said more needs to be done to promote dialogue, help the victims and the refugees, teach history honestly and create opportunities for young people to come together.

“The importance of maintaining this momentum cannot be overstated,” he said.

Charles and his wife Camilla have also visited Croatia and will travel to Montenegro and Kosovo from Belgrade. The royal couple’s visit came amid fears that Balkan tensions could be further fueled by the ongoing migrant crisis.

Prince Charles in Australia, where half don’t want him king