Santiago to miss debate, much of campaign due to treatment 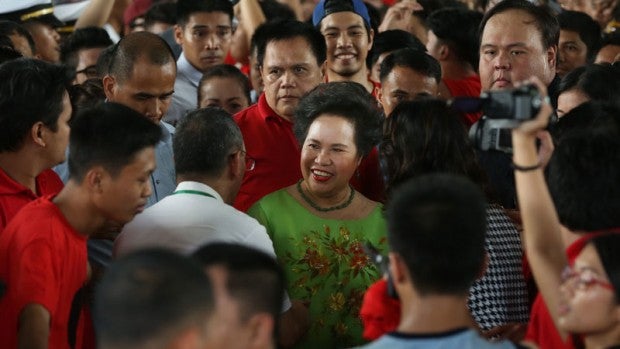 Sen. Miriam Defensor-Santiago will be undergoing a new type of treatment for cancer that will prevent her from taking part in the second presidential debate on March 20, as well as sideline her from much of the campaign with less than two months before the May 9 elections.

Santiago, 70, announced Thursday she had joined an international clinical trial for a new unnamed anticancer pill that would require her to go to a hospital daily for outpatient radiation treatment “for a short period.”

As a result, she said, she will have to skip the second presidential debate on Sunday at the University of the Philippines in Cebu.

“I am very sorry to miss out on the debates, but it would be a disservice to the country if I forego the opportunity to get rid of my cancer completely and strengthen myself further to serve the Filipino people,” the senator, who is last in presidential surveys, said in a statement.

She said she would “try” to participate in the third and last debate on April 24 in Dagupan City, “if the ongoing treatments do not inhibit” her.

Santiago, who said she was diagnosed with advanced (Stage IV) lung cancer in June 2014, said she joined the clinical trial to gain free access to the new medication which would otherwise cost her about half a million pesos every three weeks.

On Feb. 9, the official start of the campaign period, Santiago told the Inquirer  she was in “remission” from cancer. She attributed her then obvious difficulty moving to a painful pinched nerve.

Since then, she has made only six campaign appearances, mostly at universities where she remains popular and tops surveys among the young students. Her running mate, Sen. Ferdinand “Bongbong” Marcos Jr., however, has kept up a punishing campaign pace in his vice presidential run.

Santiago has canceled three scheduled campaign appearances since last week, including a sortie to her hometown Iloilo City on March 14.

Earlier, she canceled a March 7 visit to Eastern Visayas State University in Tacloban City and a March 10 visit to the University of Mindanao in Davao City.

Both times her staff cited “logistical concerns” for the cancellation.

Santiago’s last appearance was at the Our Lady of Fatima University in Valenzuela City on March 4 where she declared she would “never surrender” in the presidential race despite lagging ratings and apparent physical difficulties.

In her last two appearances, Santiago talked about her moral duty to effect political change and stop the rampant corruption in government.

“Even as we gather in this hot place, notwithstanding the inconvenience, I will never stop. I will never quit. I will never surrender,” she told hundreds of cheering students in the packed Our Lady of Fatima University covered court.

She said she was waging her campaign “so that we can always face our Creator and say that I did my best for your greater glory and the salvation of our soul.”

“You ask me how we can change our country. It’s to change ourselves. It’s such a bad world but, instead, you say ‘God, change this world and begin with me.’”

Santiago early on said her campaign would bank heavily on social media where she has the biggest number of followers among the presidential candidates.