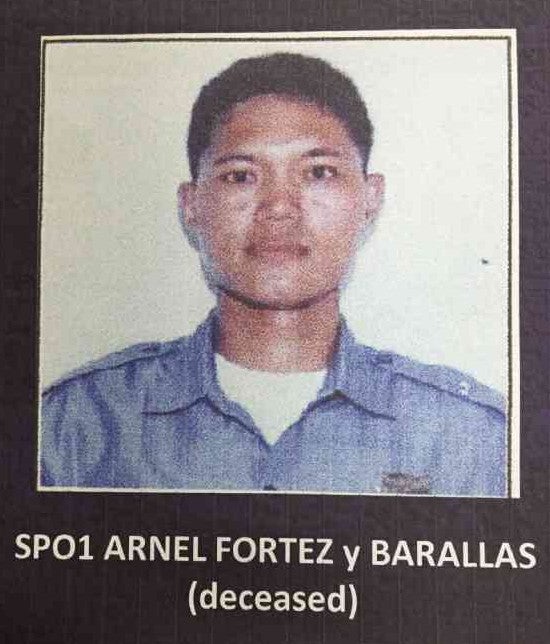 SPO1 Arnel Fortez, who was only playing peacekeeper when they had a heated argument on Wednesday. QCPD PHOTOS

The policeman who ended up being shot in the head when he tried to stop a gunfight between two colleagues inside a Quezon City police station has died.

The question now is who fired the shot that killed SPO1 Arnel Fortez, who was pronounced dead at 10:50 p.m. Wednesday, hours after he was brought to the Quirino Memorial Medical Center.

The two policemen involved in the gunfight—PO1 Rollsmith Ducusin, a patrolman and PO2 Teejay Valdez, an administrative officer—have been placed under arrest for the death of Fortez (not SPO2 Fortes as initially reported).

Ducusin, who was hit in the right arm, is now in the custody of Quezon City Police District-Criminal Investigation and Detection Unit (QCPD-CIDU) while Valdez remains confined at the Marikina Valley Medical Center for a gunshot wound in the abdomen.

All three policemen are members of the QCPD’s Eastwood station in the Libis area.

Ducusin and Valdez both face charges, Supt. Rodel Marcelo, chief of the QCPD-CIDU said on Thursday, adding that a technical investigation has yet to determine who fired the bullet that killed Fortez. Under the doctrine of proximate cause, however, both policemen would still be liable for their colleague’s death. 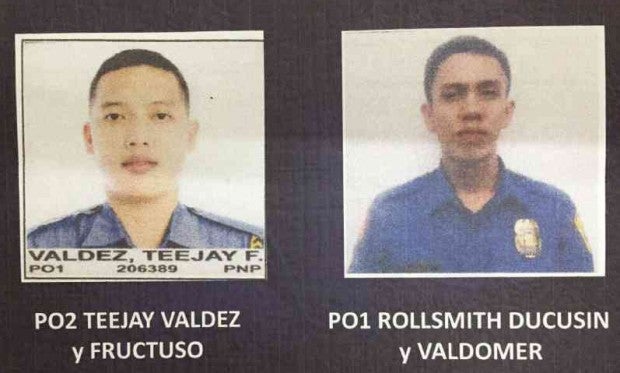 EASTWOOD HOTHEADS P02 Teejay Valdez (left) and PO1 Rollsmith Ducusin are being made to answer for the death of their colleague.

Marcelo said investigators were still gathering evidence to determine whether to file murder or homicide charges against the two by today.

Two shots were fired and two slugs were recovered from the crime scene—one each from the service firearm of Ducusin, a Glock 17 and what appeared to be Valdez’s personal pistol, a Glock 26.

Because he used a nongovernment-issued firearm, the police are looking into charging Valdez with illegal possession of firearms and violation of the election gun ban.

Before the gunfight, Ducusin had filed a blotter complaint against Valdez for allegedly threatening him following an argument over attendance records.

Accompanied by Fortez, the senior patrol supervisor, Ducusin went to the office of the station commander, Supt. Teresita Escamillan, at 3:30 p.m. on Wednesday to air his side on the complaint.

After the meeting, they came out of the office and met Valdez in the hallway, triggering a scuffle and then a firefight.

QCPD director Chief Supt. Edgardo Tinio, meanwhile, ordered the relief of Escamillan. She will be replaced by Supt. Jeffrey Bilaro.

Escamillan, on the other hand, will assume Bilaro’s vacated post as chief of the district police community relations division and concurrent chief of the public information office.

Tinio has ordered a stress debriefing for all personnel of the Eastwood Police Station and medical assistance for the wounded policemen.