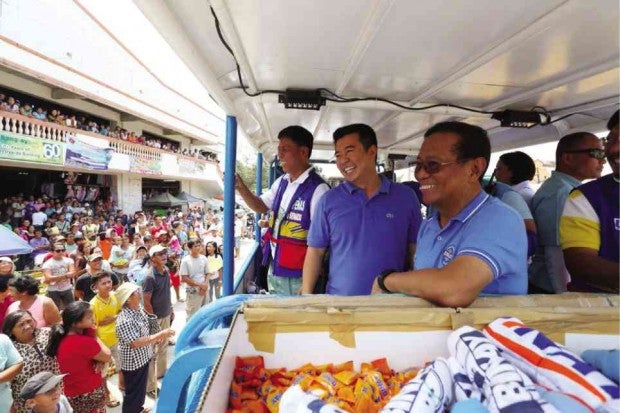 In a 62-page report, the Anti-Money Laundering Council (AMLC) said the dispatch of various amounts to Citibank in Hong Kong for Three Star Phil, a company based in the British Virgin Islands that purportedly was an investor in a Binay dummy company, was made in transactions recorded in October 2014 and facilitated by Philrem Service Corp.

A Senate hearing on money laundering on Tuesday heard testimony that Philrem had converted the $81 million that computer hackers diverted from the Bangladesh central bank accounts to the Philippines into pesos.

The Oct. 28, 2015, report recommended the prosecution of Binay for civil and criminal charges, including forfeiture of his bank accounts and other assets.

Binay has denied the accusation, saying the AMLC report was part of a campaign to derail his candidacy for President in the May elections.

The AMLC report, a copy of which was secured by the Inquirer on Monday, was signed by Amando M. Tetangco Jr., head of the Bangko Sentral ng Pilipinas, Teresita J. Herbosa, chair of the Securities and Exchange Commission and Dennis Funa, deputy commissioner of the Insurance Commission.

The AMLC looked into the bank accounts of Binay in connection with the investigation of the Senate blue ribbon subcommittee into his alleged ill-gotten wealth.

According to the AMLC report, Martin C. Subido, a partner in Binay’s law firm, Subido, Pagente, Certeza, Mendoza and Binay (SPCMB), opened a bank account at a Banco de Oro branch with an initial deposit of $2,449,054.18. This amount came from the BDO Account No. 100140217126 of Daniel C. Subido, a brother of Martin.

“It was observed that all withdrawal slips have notations written on them as to 102780130446. Said account number belongs to Philrem Service Corp., a remittance and moneychanger firm,” the AMLC report said.

Notably, the report said accounts of Binay and his alleged dummies—Gerardo Limlingan, Lily Crystal, Bernadette Portollano, and Mitzi Sedillo—disbursed amounts to Philrem’s Account No. 2780130466 in BDO.

A BDO joint account of Limlingan, Portollano and Subido disbursed a total of P100 million to Philrem by way of debit memos.

“The total amount transacted from Limlingan’s joint account is an exact matching transaction involving the crediting of $2,208,604.17 equivalent to P99,042,361.46 to the US dollar account of Daniel Subido within the same period,” the AMLC said.

From the account of SPCMB’s BDO Account No. 5390048025 transfers in rounded figures were made from July 1 to 4, 2014, between and among SPCMB, Sunchamp Real Estate Development Corp., Earthright Holdings Inc., Greenergy Holdings Inc. and to the joint accounts of Antonio L. Tiu, James Tui, Anne Lorraine Buencamino Tui and Pei Feng Lee.

Tiu is allegedly a dummy of Binay and linked to the so-called “Hacienda Binay” property in Batangas province.

Then on July 4, 2014, the SPCMB BDO account received another fund transfer of P39 million from the Sunchamp BDO account.

On that same day, SPCMB transferred P37 million via domestic telegraphic transfer to the joint account of Tiu at the Philippine Business Bank account.

The  transactions based on bank documents, establish that SPCMB was principally involved in the transfer of funds across accounts owned by persons and entities with clear and discernable links to VP Binay, the AMLC report said.

SPCMB further transferred funds obtained in the Philippines to accounts abroad. “This is a common recourse intended to bring funds beyond the reach of authorities or at the very least make it difficult to recover them,” the report said.