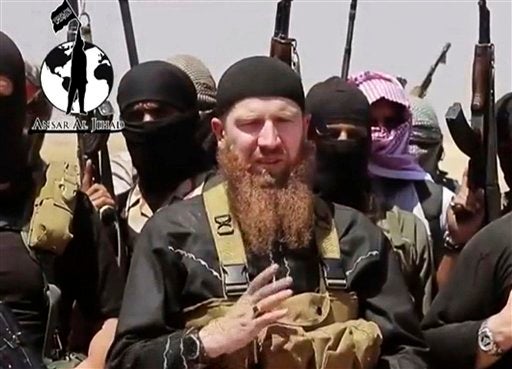 This image made from undated video posted during the weekend of June 28, 2014 on a social media account frequently used for communications by the Islamic State of Iraq and the Levant (ISIL), which has been verified and is consistent with other AP reporting, shows Omar al-Shishani standing next to the group’s spokesman among a group of fighters as they declare the elimination of the border between Iraq and Syria. AP

BAGHDAD — A spokesman for the U.S.-led coalition battling the Islamic State group in Iraq has also confirmed the death of a top IS militant, Omar al-Shishani.

U.S. Army Col. Steve Warren said on Tuesday that the coalition is able to “assess that he is dead.” Warren says they “got the word Monday morning.”

Warren described al-Shishani as a “very important figure,” in the Islamic State group, who was hit as part of a stepped-up campaign of U.S.-led airstrikes targeting IS leadership.

Earlier on Tuesday, an Iraqi intelligence official and the head of the leading Syria monitoring group said al-Shishani had died. TVJ