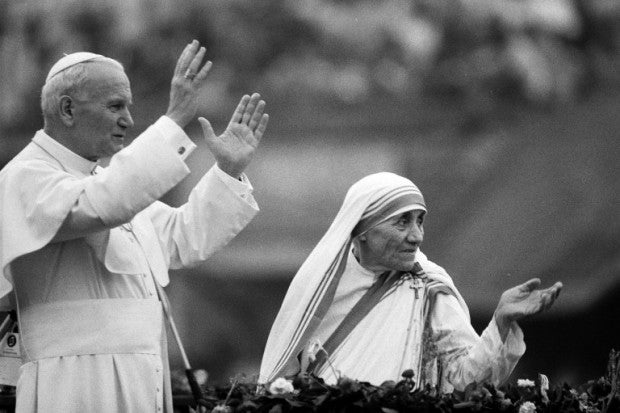 This file photo taken on February 03, 1986 shows Mother Teresa and Pope John Paul II waving to well-wishers, at the Nirmal Hriday Home, in Calcutta. The Vatican committee that approves elevations to sainthood will meet on March 15, 2016 to consider a recommendation that Mother Teresa of Calcutta becomes Saint Theresa, the Holy See announced on March 14, 2016. / AFP / JEAN-CLAUDE DELMAS

VATICAN CITY, Holy See — Pope Francis on Tuesday formally approved sainthood for Mother Teresa and set September 4 as the date for her canonisation.

The move comes 19 years after the death of the missionary nun who dedicated most of her adult life to working with the poor of Kolkata, India.

There was no immediate word from the Vatican on the location of the canonization ceremony, which is expected to take place in Rome with a thanksgiving ceremony held at a later date in the Indian city where Teresa is buried.

The Albanian nun, 87 when she died in 1997, was revered by many Catholics and won the 1979 Nobel peace prize for her work with the poor.

But she was also a divisive figure with critics branding her a religious imperialist whose fervent opposition to birth control and abortion ran contrary to the interests of the communities she claimed to serve.

Teresa took the first step to sainthood in 2003 when she was beatified by Pope John Paul II following a fast-track process involving the recognition of a claim she had posthumously inspired the 1998 healing of a critically-ill Bengali tribal woman.

Last year she was credited by Vatican experts with inspiring the 2008 recovery of a Brazilian man suffering from multiple brain tumors, thus meeting the Church’s standard requirement for sainthood of having been involved in two certifiable miracles.

Teresa was born Agnes Gonxha Bojaxhiu to Albanian parents in 1910 in Skopje, now the capital of Macedonia.

She started her life as a nun as a teenager with a missionary order in Ireland and arrived in India in 1929.

After more than two decades of missionary and charity work, she founded her own Missionaries of Charity order in 1950. She was granted Indian citizenship a year later.

Francis, who regards Teresa as the incarnation of the kind of Church he wants to lead, met the by-then internationally famous nun three years before her death, when he was still a bishop in Argentina.

He later joked that she had seemed so formidable he “would have been scared if she had been my mother superior.”

Others were much harsher in their judgement, with the likes of Australian-born feminist writer Germaine Greer and British polemicist Christopher Hitchens accusing her of contributing to the misery of the poor with what they saw as her dogmatic views.

In her Nobel acceptance speech, Teresa described terminations of pregnancies as “direct murder by the mother herself.”

Critics also raised questions about the Missionaries of Charity’s finances and conditions in the order’s hospices.

The late Italian film director and writer Pier Paolo Pasolini was among those who fell under her spell, in his case when he met her during a trip to India in the early 1960s.

“She has an almost virile jaw and a gentle eye that in its gaze ‘sees,'” he wrote, describing Teresa as a a combination of “goodness without sentimentality, someone with no expectations who is both calm and calming, powerfully practical.”

India granted her a state funeral after her death and her grave in the order’s headquarters has since become a pilgrimage site.