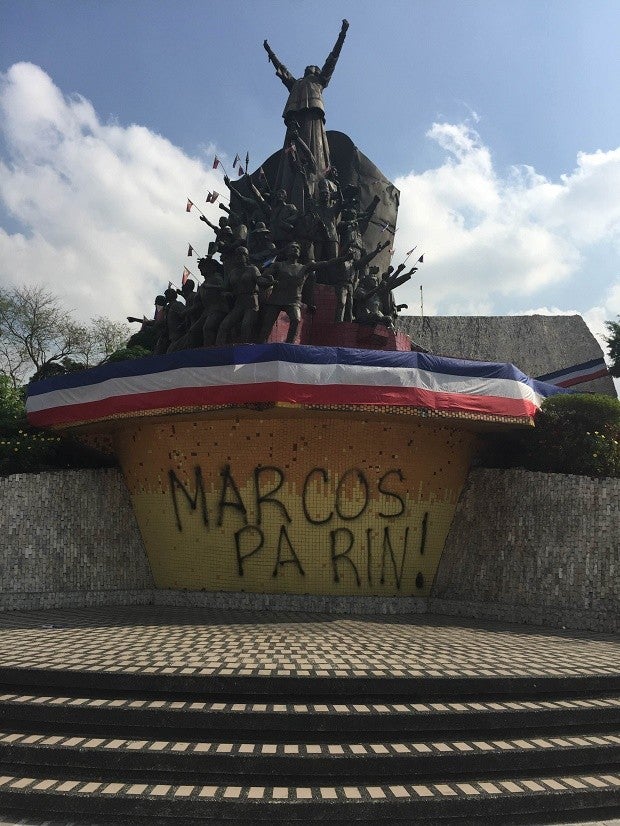 The Edsa People Power Monument, a sculpture commemorating the peaceful revolution in 1986 that toppled President Ferdinand Marcos, was vandalized on Tuesday with a message praising the late strongman.

The son and namesake of Marcos is running for vice president in the upcoming May elections. Results of the latest Pulse Asia and Social Weather Stations surveys showed that he is statistically tied with Sen. Francis “Chiz” Escudero in the first place for the second highest position in the land.

Edsa People Power Commission spokesperson Celso Santiago slammed the graffiti as he posted on Facebook a photo of the defaced lower part of the monument with “Marcos pa rin!” scribbled on the yellow and orange tiles.

(I respect everyone’s freedom to express their sentiments and to campaign for their candidate. But it is not right to violate the law to do these.)

Santiago said he was “appalled” by the incident and as soon as he learned of the news, he went to the site to check and take photos.

“We hope the investigation will shed light on this,” he said by phone.

In a separate statement, the EPPC condemned the vandalism, saying it was “regrettable that the monument, which is deeply valued by millions of Filipinos, has to be desecrated to convey the vandal’s own political thoughts.”

“We believe that the vandal should have resorted to alternative means of self-expression that respect both the rule of law and the viewpoints of others. For when we selfishly impinge our own political beliefs on other Filipinos, we go down on a slippery slope, we regress to the ways of authoritarianism and dictatorial rule,” it added.

For them, the monument was “a symbol of our people’s triumph over a dictatorship that distorted the rule of law, and employed violance to impose its own political beliefs on an entire nation.” The vandalism “belittled the heroism and sacrifice of our country.”

Maria Elena Acabucha, a worker of the Metro Manila Development Authority along White Plains told INQUIRER.net that they saw the graffiti at about 7 a.m. on Tuesday.

“We think this was done last night. We left at around 3 p.m. yesterday and it wasn’t there yet,” she said.

She said the Department of Public Works and Highways cleaned the spray-painted writings at around 11:30a.m.

The monument, created in 1993 by award-winning sculptor Eduardo Castrillo, is located on the corner of the EDSA and White Plains near Camp Aguinaldo. CDG

Do Filipino youth care about the Edsa Revolution?