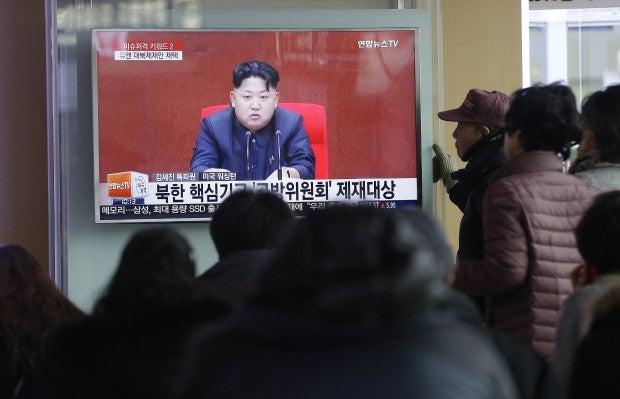 The order came after Kim monitored the successful lab-test of the warhead re-entry technology required for a nuclear strike on the US mainland, the North’s official KCNA news agency said.

Kim’s comments were the latest in a series of daily statements and warnings by Pyongyang, talking up the North’s nuclear strike capabilities and threatening attacks on Seoul and Washington.

The main focus of the threats has been ongoing, large-scale military exercises by South Korea and the United States that Pyongyang has condemned as rehearsals for invasion.

In order to boost the reliability of the nation’s nuclear deterrent still further, Kim said a nuclear warhead explosion test and test firings of “several kinds” of ballistic rockets would be carried out “in a short time”.

The warning came days after state media released photos of Kim posing with what was claimed to be a miniaturized nuclear warhead capable of fitting on a ballistic missile.

Kim had said last week that the North was planning to conduct new tests to gauge the “destructive power” of the new, miniaturized warheads.

While North Korea is known to have a small stockpile of nuclear weapons, its ability to deliver them accurately to a chosen target on the tip of a ballistic missile has been a subject of heated debate.

There are numerous question marks over the North’s weapons delivery systems, with many experts believing it is still years from developing a working inter-continental ballistic missile (ICBM) that could strike the continental United States.

Others have doubted whether any miniaturized device the North has designed so far would be robust enough to survive the shock, vibration and temperature change associated with ballistic flight.

Tuesday’s KCNA report said Kim had personally monitored a test simulating the intense heat and vibration that a nuclear warhead would undergo during atmospheric re-entry.

The test was a complete success, the agency said, and provided a “sure guarantee” of the warhead’s ability to withstand re-entry.

Tensions have been rising on the Korean peninsula ever since the North conducted its fourth underground nuclear test on January 6, followed by a long-range rocket launch a month later.

The UN Security Council responded by adopting a resolution earlier this month laying out the toughest sanctions imposed on Pyongyang to date over its nuclear weapons program.

The resolution broke new ground by targeting specific sectors key to the North Korean economy and seeking to undermine the North’s use of, and access to, international transport systems.

For all Pyongyang’s recent claims, most experts rule out the prospect of North Korea launching any sort of nuclear strike with a largely untested system, saying it would be tantamount to suicide given overwhelming US technical superiority.