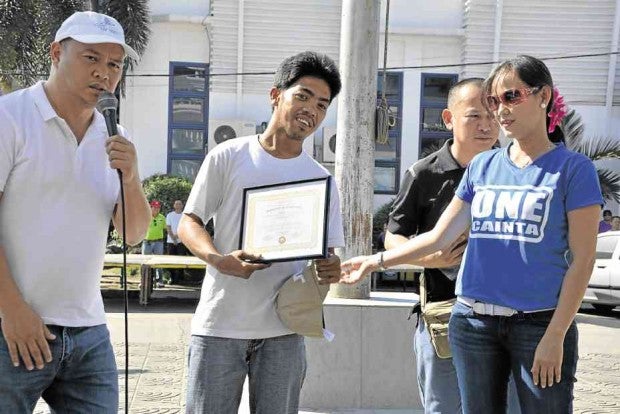 FOR coming to the aid of a stranger, Jecenth Mateo gets his just reward—a free house and lot courtesy of a grateful Cainta municipal government. Cainta Public Information Office

THE TRAFFIC enforcer who was nearly ran over by a motorcycle rider and the biker who rushed to her rescue may soon end up being neighbors.

In a program held Monday at the Cainta municipal hall, Mayor Johnielle Keith Nieto rewarded Annabelle Montiadora and Jecenth Mateo with their own house and lot.

He turned over to the pair the titles to two 32-square-meter lots at Upper Cuatro, Valley Golf in Barangay San Juan, a low-cost housing project of the municipal government. Each plot of land is worth around P160,000.

Normally, beneficiaries must shoulder the construction of their houses after being awarded the lots. Nieto, however, promised to look for a nongovernment organization that would build houses for Mateo and Montiadora for free.

Aside from their own house and lot, the duo also received a cash incentive of P10,000 each.

In a phone interview with the Inquirer Monday, Montiadora, a 36-year-old traffic enforcer of the Cainta municipal government, welcomed the idea of having her own place.

The single mother and her 7-year-old son are staying in her cousin’s house.

Last week, a video of Montiadora flagging down call center agent Warren Ramos for a traffic violation became viral after the latter fled on his motorcycle, nearly running over her.

Mateo, 22, a laborer, was riding his bike on his way to work when he witnessed the incident. He ran on foot after Ramos who later ended up behind bars.

Nieto said that Mateo’s act “endeared himself to a grateful people.”