Osmeña: PH might be 1st country headed by 2 women 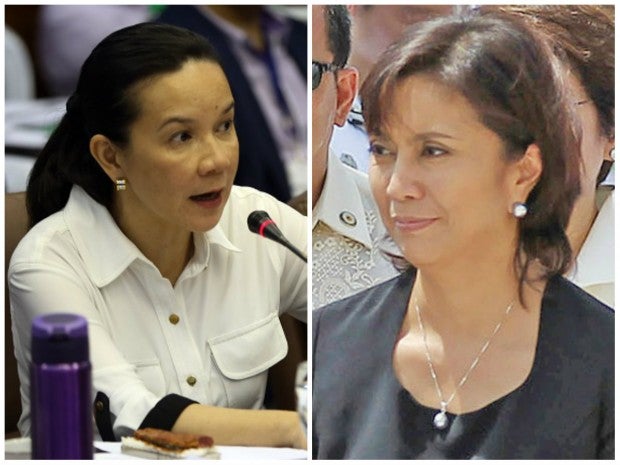 Reelectionist Senator Sergio “Serge” Osmeña III raised the possibility on Monday that the country might be the first in the world to have two women leaders.

Osmeña was referring to Senator Grace Poe, who topped the latest Social Weather Stations’ (SWS) presidential survey, and Camarines Sur Representative Maria Leonor “Leni” Robredo, who closed in on her top rivals in the vice presidential race based on the same survey.

“Getting better kasi ngayon nakikita ko siya na (It’s getting better now, I can see) she’s addressing groups alone,” Osmeña said in an interview at the Senate when sought to react to the latest SWS survey.

Osmeña earlier said that Robredo could overtake her rivals if she would be given a free hand to develop her on message and run her own campaign.

READ: Osmeña on Robredo: ‘Allow her to develop her own message’

“We might be the first country of the world headed by two women,” he said.

(That’s why when they always ask me, ‘Will you help in gender equality,’ I say ‘The men are on the losing side because we know it’s the women that run the show. In our house, my wife is the boss.)

Osmeña also believes that Robredo benefitted from the issues raised against Marcos.

Meanwhile, Osmeña could not say if Poe’s ratings would continue to rise until the election day, saying, “This is the game of mistakes.”

Asked what he thinks Poe should be wary to keep her good ratings, Osmeña said: “That’s a very hard advice…para sa akin (for me), just be yourself.” RAM

Read Next
Arroyo asks SC for 5-day birthday furlough
EDITORS' PICK
Duterte warns of possible lockdown if ‘more aggressive’ Delta variant spreads
Tips for a cheerful life
Harnessing technology for quality education
Connect to PH’s fastest network with new Signature Plan Lite at only P599 per month
Duterte: When I said I will fight drugs in 6 months, I thought it was like in Davao
Hidilyn Diaz wins weightlifting gold in Tokyo Olympics
MOST READ
Hidilyn Diaz wins weightlifting gold in Tokyo Olympics
Go to war with China over West PH Sea? It will be a ‘massacre’, says Duterte
Hidilyn shoots not only for gold but also for permanent place in PH sports history
Duterte acclaims Sotto: ‘He can become a good vice president’
Don't miss out on the latest news and information.