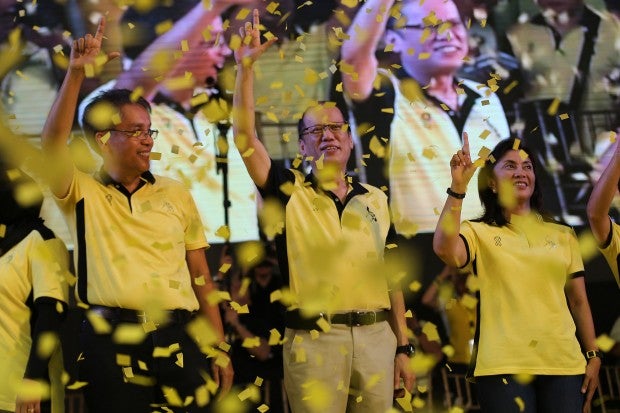 Malacañang is elated with the results of the latest Social Weather Stations (SWS) poll which showed its candidates maintaining their ground in the tightly-contested presidential and vice presidential races.

In a statement, Presidential Spokesperson Edwin Lacierda said that the results of the SWS survey meant that the electorate is looking for a tandem which would push for continuity of the reforms started by the Aquino administration.

According to the latest survey results, Liberal Party standard-bearer Manuel “Mar” Roxas II gained a four-point boost at 22 percent from 18 percent in December.

Lacierda also took a swipe against Roxas’ rivals in the survey—Vice President Jejomar Binay and Davao City Mayor Rodrigo Duterte—after the two candidates lost points. Binay suffered a five-point dip in his rating (from 29 percent in December to 24 percent in March). The feisty mayor, meanwhile, lost four points which placed him to fourth place at 21 percent.

“The latest snapshot of public opinion reveals that the electorate is troubled by integrity questions against candidates. At the same it time, it shows the continuing consolidation and expansion of voter preference for the tandem of continuity, integrity, and reform,” Lacierda said.

Things are looking up for the administration’s vice presidential candidate Camarines Sur Representative Ma. Leonor “Leni” Robredo as she is slowly closing in on her rivals. The SWS survey showed that Robredo in third place at 24 percent. She is trailing behind front runner Senator Francis “Chiz” Escudero (28 percent) and Senator Ferdinand “Bongbong” Marcos Jr. (26 percent).

With the survey’s +2/-2 survey margin, Escudero and Marcos are considered to be “statistically tied.”

“Despite the mudslinging and concerted attacks against the administration and its record of public service, not only has the Daang Matuwid coalition endured—but it is gaining ground as our fellow citizens continue to ask tough questions and demand concrete solutions from all the candidates,” the Palace official said.