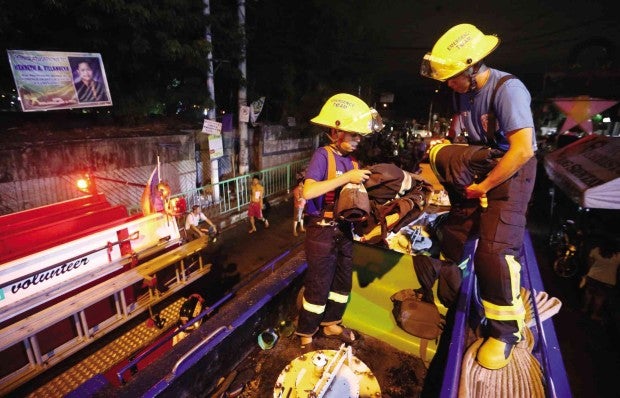 When a fire breaks out and the PAVG responds, Banny Cruz, shown with the group’s OIC Arnold de Lima, can usually be found on his perch: On top of the group’s fire truck, guarding the firemen’s valuables. LYN RILLON

WHILE most children his age would rather play video games or watch TV during their free time, 11-year-old Ricardo Cruz prefers to help his fellow firefighters put their gear and quarters in order and ensure that the fire truck is in good working condition.

Cruz, known to his family and friends as “Banny,” helps out in these tasks—not to get a reward—but because he is considered one of the 25 active members of the Pasig Alliance Volunteer Group (PAVG).

The group of volunteer firemen formed in the early 2000s by Arnold de Lima and other civic-minded Pasigueños in Bagong Ilog has become Cruz’s second family over the past four months. In fact, he already has a call sign (the group has dubbed him ‘Armada Junior’).

The boy is considered a volunteer-in-training who stays at the group’s headquarters on Kamagong Street. He goes with other volunteer firemen whenever they respond to a call but being a minor, Cruz does not participate in the actual firefighting.

Staying far away from the action, he can be found on top of the group’s fire truck where he can concentrate on his task—look after the gear and equipment of the firemen.

The 10th child in a brood of 11, Cruz was an out-of-school kid who often crossed paths with PAVG members, usually when they were on their way back to their old headquarters on Avis Street after responding to a fire report. At that time, the boy used to tag along with Bobby, his older brother who was one of the barangay watchmen in the area.

“We called him ‘batang tanod’ (junior watchman) back then. He would greet us with a yell: ‘Sir, sama ako! (Let me come with you),’” De Lima told the Inquirer in a recent interview.

The group later realized that Cruz was serious. When De Lima asked him if he wanted to join them at their new headquarters on Kamagong Street, the boy didn’t need much prodding.

“We told him it was less risky to join our group. If he stays with the barangay security force, he might find himself caught in a crossfire, especially should a riot break out,” De Lima said.

According to Cruz, he often accompanied his brother on his nightly patrols back then since there was no one to look after him at home. He added that he decided to join the volunteer firemen’s group for the simple reason that he wanted to be of service to the public.

De Lima said that before he could join the PAVG, Cruz had to get permission from his mother, a laundry woman who also doubles as a tricycle driver following the death of her husband last year.

Since becoming a volunteer four months ago, Cruz has been given “real work” such as helping clean the fire truck, sorting hoses and even assisting in the cleaning of their quarters. For this, he receives no pay although his basic needs are shouldered by the group, a big help considering that his mother has a hard time making enough money from washing clothes and driving a tricycle.

In fact, Cruz has his own firefighter uniform which he dons every time they receive a call for fire assistance, usually in Metro Manila. Still, the farthest the pint-sized fire volunteer has accompanied the group was in Calaca town, Batangas, when a blaze engulfed last month the Phoenix Petroterminal and Industrial Park.

Just recently, a blaze broke out near the boy’s house on Buenaventura Street with PAVG one of the firefighting groups which responded.

“His neighbors thought he was a hero,” De Lima said, adding that Cruz’s mother, Lori,” was very proud of her boy.

Upon hearing the compliment, Cruz could respond only with a hearty smile. Shy and timid, he replied in monosyllables whenever the Inquirer talked to him, preferring to let De Lima do all the talking.

But when prodded to describe how he felt about being a volunteer firemen, Cruz said he was happy to be part of a group engaged in honest and decent work.

According to him, he decided to drop out of school because he was not interested in his studies. But this coming school year, he will enroll as a Grade 4 student at Bagong Ilog Elementary School after PAVG members convinced him that it was important for him to complete his studies.

To prepare him for school, De Lima said that Cruz was currently taking up two-hour basic computer studies every day at a learning center sponsored by the local government.

De Lima is proud that PAVG has a young volunteer like Cruz who is admired by others because of his passion and interest in becoming a future firefighter.

“We hope that Banny will serve as an inspiration to kids and out-of-school youth; to those who have strayed off the right path and become a burden to their parents. Banny may be an out-of-school youth but he has already contributed a lot to society,” he said.