No funds yet for irrigation projects, says Butil solon 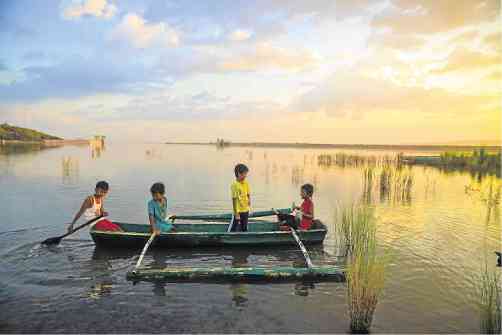 ROW YOUR BOAT Children while their time away on a boat on a shallow portion of the reregulating pond below San Roque Dam’s spillways in San Manuel town in Pangasinan province. Water used to turn the turbines to produce electricity are released to this pond. The National Irrigation Administration, in turn, regulates the release of irrigation water to rice fields in eastern and central Pangasinan towns. ROGER TINGLE / Contributor

CITY OF SAN FERNANDO—National and communal irrigation systems programmed for 2016 have not received any funds yet from the national government, Butil party-list Rep. Agapito Guanlao said here on Friday.

“No [notices of cash allocation] have been released but the projects have been bid out already,” Guanlao told the Inquirer.

The Jalaur project seeks to irrigate more than 31,840 hectares of farms and to contribute 7.6 percent to the national rice self-sufficiency target.

The Balog-Balog project aims to irrigate 39,150 ha and to mitigate floods.

“Butil requested P10 million for shallow tube wells for mitigating the dry spell coming with El Niño but the money has not come as well,” Guanlao said.

He urged the government to step up the construction of irrigation projects to help farmers and increase food production.

Florentino David, National Irrigation Administration (NIA) director in Central Luzon, said all lump-sum projects should undertake the procurement process first. The result of the process will be submitted to the Department of Budget and Management for the issuance of the Special Allotment Release Order. Then awarding to winning bidders will follow, David said.

The agency reported spending P1.09 billion on 43 subprojects entailing the expansion of existing irrigation systems in 2015.