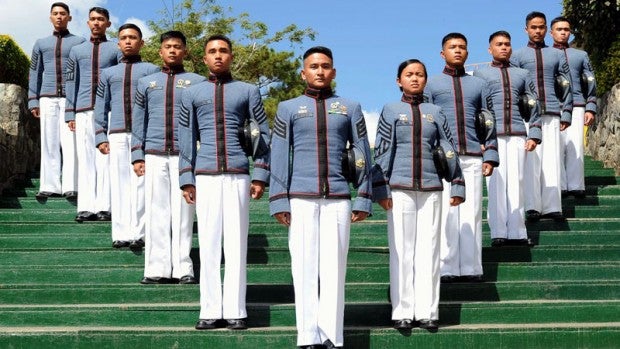 FORT DEL PILAR, Baguio City—Before they were ceremonially “dunked” into the pool by their underclassmen, graduating members of Philippine Military Academy (PMA) “Gabay Laya” Class of 2016 were given this piece of advice by Defense Secretary Voltaire Gazmin: “Keep your integrity.”

“You must hold on to your integrity as this will define your character,” said Gazmin as he handed out special awards and recognition to top performers of the class at Borromeo Field here on Saturday.

The Gabay Laya members will be commissioned as junior officers in the Army, Navy and Air Force by President Aquino at their graduation on Sunday.

Addressing the graduating class, Gazmin said that heeding the virtues of integrity, courage and loyalty as espoused at the PMA would help steer their careers through the “realities of the service.”

“It is not the medals you will wear that is important,” he told the graduates, but their adherence to morality and ethics and for maintaining “absolute respect for yourselves and the people you serve.”

“Time and again the Department of National Defense and the Armed Forces of the Philippines had risen to face moments of change,” he said, so the Gabay Laya members must “be ready to confront the evolving dynamics of your profession and your duties.”

Gazmin, a member of Class of 1968, said that “coming home” to the PMA always gave him a sense of gratification.

His visit also showcased how much the PMA has changed. Fort Del Pilar has accommodated more tourists in the last few years, having become a major tourist attraction in the city.

Academy officials have relaxed some of the restrictions and have even allowed visitors to promenade in flip-flops, which used to be against the rules, according to a PMA staff member.