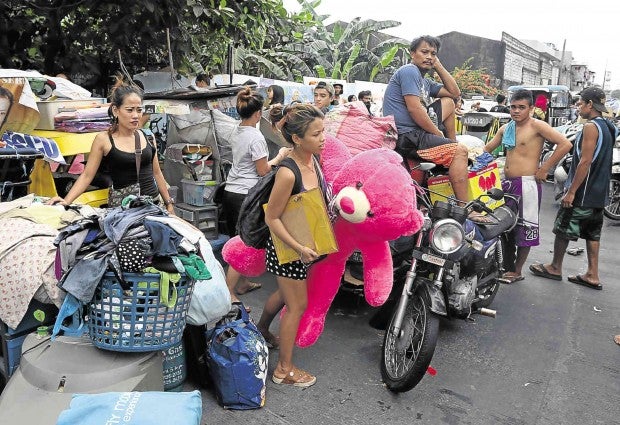 Residents who fled a fire in San Andres Bukid, Manila, could only save a few belongings—like a teddy bear and some clothes—as their neighborhood burned down Saturday morning. MARIANNE BERMUDEZ

At least 200 families were left homeless by a fire that damaged about a hundred homes, including two tenement buildings, and a parochial school in San Andres Bukid, Manila, Saturday morning.

The city fire marshal, Supt. Jaime Ramirez, said the blaze started around 8 a.m. on the second floor of the house owned by Junior “Turing” Lubiano in a depressed neighborhood beside the Domus Mariae tenement housing on Sagrada Familia Street.

Among the structures damaged by the four-hour fire was the building of the Holy Family Parish School.

Senior Fire Officer 1 Axle Ramos of the Bureau of Fire Protection said Lubiano, when found by investigators, claimed he had just stepped out of his house when the fire started.

The cause of the fire remained under investigation at press time, but the word on the street blamed it on faulty electrical wiring.

“It’s probably because they use jumpers,” said Analisa San Jose, 43, a Domus Mariae resident who rushed out of the building with her 3-month-old grandson. She said they were both awakened by panicked shouts in the neighborhood and “we grabbed whatever we could. What’s important is that the baby is safe.”

Ramos estimated the damage to property at P5 million, noting that the affected residential area covered about 3,000 square meters and straddled two villages (Barangay 770 and Barangay 775).

At least seven people sustained minor injuries in their rush to escape the flames.

Manila Department of Social Welfare chief Arnold Pangan on Saturday said his office would be providing meals for the displaced residents three times a day, as well as  grocery items and plastic sleeping mats until they could rebuild their homes.