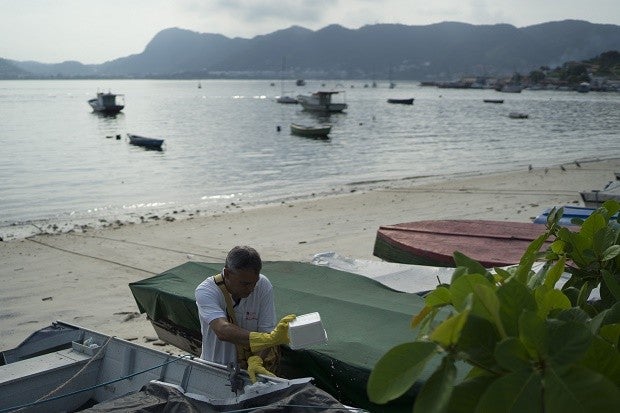 In this Tuesday, March 8, 2016 file photo, a health agent scoops water from a boat docked at the Jurujuba beach during an operation to eradicate the Aedes aegypti mosquito, in Niteroi, Brazil. On Friday, March 16, 2016, U.S. health officials are revising their Zika travel warnings, saying it’s OK for pregnant women to travel to Mexico City and other destinations at high elevations. AP FILE PHOTO

NEW YORK — The US government revised its Zika travel warnings Friday, saying it’s OK for pregnant women to travel to Mexico City and other places at high elevation in outbreak regions.

The kind of mosquito that spreads the Zika virus is rare at higher elevations because of the lack of humidity and other conditions, according to the Centers for Disease Control and Prevention. Infections from Zika or the related dengue virus haven’t been seen high up.

Since mid-January, the health agency has advised pregnant women to avoid travel to areas with Zika outbreaks because the virus may be linked to a surge of birth defects in Brazil. The list has grown to about three dozen destinations, most in Latin America or the Caribbean.

Friday’s revision excludes any part of those countries above 6,500 feet (2,000 meters).

CDC officials insisted science drove the change, but acknowledged there were concerns that overly broad travel warnings might unnecessarily hamper trade and tourism.

“I suspect several countries will be quite pleased” by the revision, said Dr. Martin Cetron, who leads CDC’s division of global migration and quarantine.

Five of the countries have large cities or sizeable areas at high altitudes, including Mexico City, Bolivia’s La Paz and Colombia’s Bogota.

Mexico Health Department’s Dr. Cuitlahuac Ruiz Matuz said authorities there had objected to a blanket travel advisory for the country before it was issued, and had lobbied CDC for a change.

“Now they are correcting things a little bit,” Ruiz said.

He argued that the CDC should be even more specific and report where Zika has been detected. There have been 143 confirmed cases in Mexico, 128 in the southern states of Chiapas and Oaxaca. The remaining 15 are spread over six other states.

Besides the capital, Mexico has other large cities such as Puebla, Toluca and Guanajuato and the popular tourist destination of San Cristobal de las Casas at elevations above 6,500 feet.

Experts think most people infected with Zika virus don’t get sick. And those that do usually develop mild symptoms — fever, rash, joint pain, and red eyes. But the unexpected numbers of birth defects in Zika outbreak areas of Brazil have raised alarms.

An estimated 40 million US travelers went to Zika outbreak destinations last year, including about a half million pregnant women, CDC officials estimate. The CDC advises all travelers to Zika areas to use insect repellent and take other steps to avoid mosquito bites.

Read Next
Nancy Reagan, her era and marriage, remembered at funeral
EDITORS' PICK
Editorial: Unusual haste
New Year, New Rediscoveries
Driving can be even more rewarding this New Year — here’s why
Tracing app pesters MRT commuters
Experience clearer calls nationwide with Smart VoLTE
Senate probe foils vaccine overpricing
MOST READ
Duterte to firms: No franchise until you settle your accounts with gov’t
7 copassengers of UK variant patient can’t be traced
Norway advises caution in use of Pfizer vaccine for the most frail
#DefendUP trends after DND scraps agreement with UP
Don't miss out on the latest news and information.