For “Jenny” of Quezon City, hearing these catcalls from strangers on the street made her daily walk to school a traumatizing ordeal. Just to avoid them, the student now takes a longer route to her campus.

There are many, many more Jennys where she lives.

A Social Weather Stations (SWS) survey conducted in barangays Bagong Silangan and Payatas, Quezon City, showed that “3 of 5 women”—or 60 percent of the respondents—were victims of sexual harassment in public spaces at one point in their lives. Fifteen percent said they experienced harassment at least once a week last year.

The survey also found that 34 percent of the women experienced some of the worst forms of sexual harassment, like being groped in public or encountering men who exposed their genitals.

Seventy percent said they were sexually harassed by total strangers. Fifty-eight percent said it happened to them in the streets, 10 percent in transport terminals, 8 percent on school grounds and 8 percent inside stores and malls.

The incidents of harassment happened more often during daytime, at 70 percent; 23 percent took place at night, while 1 percent happened after midnight or in the wee hours, the survey also showed.

Half of the female respondents said they did nothing after being sexually harassed. Twenty percent said they just chose to remain silent because they were afraid or expected nothing to come out of their complaint, while 39 percent thought that sexual harassment is a minor or negligible concern.

The SWS survey was conducted from Feb. 13 to 18 among 400 men and 400 women (from both barangays) aged 12 years old and above. It had a margin of error of plus-or-minus 5 percent and a 95-percent confidence level.

One in 7 men—or 15 percent—admitted harassing women at least once a day in 2015. The SWS findings also showed that men commit sexual harassment regardless of educational attainment, background or employment status.

The notion of “victim blaming” is largely due to the lack of awareness of women’s rights, according to Katherine Belen, the Philippine program head of the UN Women Safe Cities Global Initiative.

The survey results were presented March 7, on the eve of International Women’s Day, in line with the launch of the UN Women Safe Cities project in the country, starting in Quezon City. The project, which covers 23 other pilot cities worldwide, aims to curb sexual harassment and violence against women by waging campaigns on the local government level.

“Currently there is a gap when it comes to the safety of women in public spaces. When a woman leaves the house, there is no specific law that protects her safety; everything before rape is not covered by the current law,” Belen said during the launch held at the Quezon Museum inside the Quezon Memorial Circle.

“Women lack awareness on what can be done [when they are victimized]. They feel there is no proper authority who can do something when they are harassed in the streets,’’ she added. 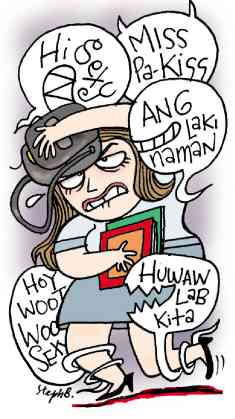 Poverty not a factor

Poverty or living in depressed areas has no direct link to the incidence of sexual harassment. In fact, she noted, “the survey showed more women feel safer within their own barangays than in the city in general.”

Actress Glaiza de Castro, the project’s celebrity campaigner, called on men to do their part in eliminating sexual harassment in the streets or workplaces, and on women to join activities that can empower them against the problem. With this objective, De Castro will lead a self-defense course for women on the last week of March.

“We know about it, we are offended by it, but we don’t know how to go about it or prevent it,” said De Castro, who also admitted that in show business, “when we do love scenes [on a movie set], it’s sometimes hard to distinguish if you are already being sexually harassed or not.”

The entertainment industry can therefore be a major partner in the campaign against sexual harassment, she stressed. TVJ