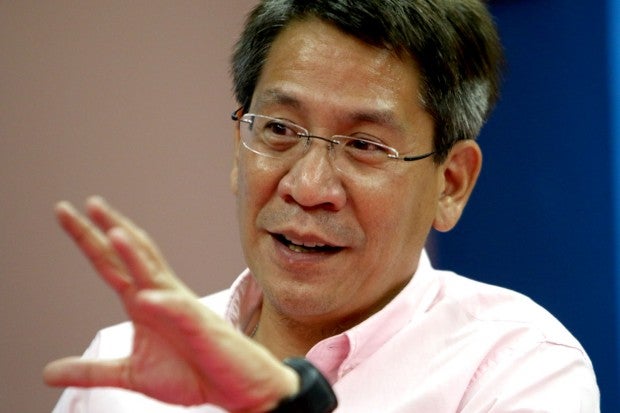 Senatorial candidate and Pasig City Representative Roman Romulo answers questions from Inquirer reporters and editors in a round table discussion at the paper’s office in Makati City. RICHARD A. REYES

Politicians have a weak loyalty to political parties because there are no sanctions for jumping from one party to another, according to Pasig Rep. Roman Romulo.

Romulo, who is running for senator in the May elections, said it would be better if the country had just two political parties which would receive financing from the government.

But while he is a member of the ruling Liberal Party (LP), he  is running under the slate of independent presidential candidate Sen. Grace Poe, saying he chose to support her because she was the only candidate who had a detailed platform for higher education.

He said he had offered to resign from the LP after he decided to support Poe instead of standard-bearer Mar Roxas, but an unnamed party leader had told him it was not necessary.

“The party leader I talked to within the House [of Representatives] said that he doesn’t see any reason to do so because there’s a coalition anyway within the House and I’m the chair of the committee on higher education,” he told Inquirer  editors and reporters on Thursday night.

Committee chairmanships in the House are given to senior members of the majority coalition.

He agreed that the country’s multiparty system and political parties are a joke, “in a way.”

“Party loyalty is not strong in our country because first of all, the Constitution allows a multiparty [system]. It does not provide for any violation. You can actually go from one party to the other without penalties,” he said.

He noted that there was an exodus of Lakas members to the LP and other parties in the House when President Benigno Aquino III came to power in 2010.

According to Romulo, a return to the two-party system might be better for the country. He said that if plans to amend the Constitution were to push through, one of the issues that should be tackled is a review of the multiparty system.

“If we have a two-party system and there is government financing for campaigning, then I think that will be a lot better than the current multiparty system,” he said.

Government financing for a multiparty system would not be feasible because the financial burden would be too much, he added.

Romulo also related how he came to support Poe and join her slate. He claimed that he did not know of any LP plan to exclude him from the party’s senatorial lineup when he decided to go with Poe.

According to Romulo, in August 2015, he had a chance meeting with Poe at the birthday party of Nationalist People’s Coalition member and Batangas Rep. Mark Mendoza. He had known Poe since they were high school students, but they had not seen each other for a long time.

At the time of the meeting, Romulo said he was still among the 18 senatorial aspirants that the LP was considering for its lineup, based on what party members had told him.

During the party, the two got to talk and Poe asked about the education laws that he had passed. She also invited him to an education forum that she would be attending in Nueva Ecija province the next day, and he accepted.

They did not discuss Poe’s plan to run for President or her senatorial slate, Romulo said.

According to Romulo, it was during Poe’s declaration of her presidential candidacy at the University of the Philippines the following month, which he attended, that he experienced a conversion. When Poe announced her 20-point agenda, this convinced him to join her, he said.

Meanwhile, questions had arisen in the LP about Romulo’s presence at the Nueva Ecija event.

“Whichever came first—maybe they had internal talks that I would not be included in the LP slate, I did not know about it—as far as I knew, they were in the process of making a decision,” he said.

As to whether he was sending the wrong message by being with the LP and not supporting its candidate, he said his decision may not be easy to understand.

He agreed that ideally, he should be backing the LP standard-bearer.

But what is important, he said, is that he saw a platform of government that was the same as his.

Roman and Shalani, in a home filled with love, TV comedies—and talk on education bills