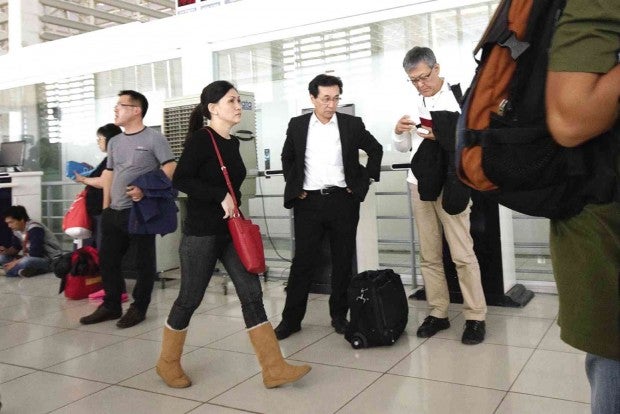 OFFLOADED FROM PLANE Maia Santos-Deguito, manager of the Rizal Commercial Banking Corp. branch on Jupiter Street in Makati City, walks away after being offloaded from a Philippine Airlines flight bound for Tokyo on Friday. She was barred from leaving the country ahead of a Senate investigation into her alleged involvement in an $81-million cross-border remittance transaction. CONTRIBUTED PHOTO

Not knowing that she was on the lookout list of the Bureau of Immigration, Maia Santos-Deguito, the bank manager at the center of a money laundering scandal, tried to leave the Philippines on Friday but was taken off her plane by immigration officers at Ninoy Aquino International Airport (Naia).

Deguito, manager of the Rizal Commercial Banking Corp. (RCBC) branch on Jupiter Street in Makati City, was already aboard Philippine Airlines Flight 432 to Tokyo together with her husband and son when immigration authorities came aboard and took them off the plane.

It was unclear why the family was stopped from leaving. All that David de Castro, spokesperson for the Manila International Airport Authority (MIAA), could say was that they were “off-loaded” on orders from the immigration bureau.

A source who requested anonymity told the Inquirer that Sen. Serge Osmeña III, who is leading a Senate investigation into the alleged laundering of $81 million stolen from the US account of the Bangladesh central bank through the Philippine financial system, had asked the justice department to stop Deguito from leaving the country.

RCBC lawyers had asked Osmeña to intervene in keeping Deguito in the country, the source said.

Deguito, at whose bank branch the $81 million was transferred by unknown computer hackers from Bangladesh Bank’s account in the Federal Reserve Bank of New York, is under investigation by the RCBC management.

The Anti-Money Laundering Council (AMLC) and the National Bureau of Investigation are looking into the operation to launder the stolen money through the Philippine financial system.

The Senate blue ribbon committee will open its own investigation on Tuesday next week.

No charges have been brought against Deguito, but she said in a radio interview on Friday that immigration officers showed her a fax from the AMLC stating that she was “part of the money-laundering scheme.”

“[It means] they should not allow me to escape from the law. But I’m not really escaping from anything,” Deguito said.

She said she had been receiving death threats since reports of the alleged money laundering broke out, but she was just taking her son to Disneyland in Tokyo as a birthday gift.

She said the immigration officers showed her no subpoena, whether from the Senate, which has summoned her to next week’s hearing, or from a court.

“[My lawyer] talked to the immigration officers, but they kept saying [they were just following orders],” she said.

She did not say where she and her family were taken, but an airport source said they were taken to the immigration bureau’s main office in Intramuros, Manila.

Aileen Saldana of the Naia Terminal 2 flight information unit said the plane was “ready for takeoff” at 3:37 p.m. but it took off at 4:05 p.m.

But a report from the gate planning unit of the MIAA said the delay was due to “air traffic congestion” and not the removal of Deguito and her family from PR 432.

In her radio interview, Deguito said she was “just a small person” to be blamed for the mess at RCBC.

“I’m just an employee. All I know is I never did anything wrong,” she said.

Deguito said she was “being dragged into something” she did not understand.

Asked if she was willing to be a state witness in the investigation, Deguito said she was afraid to do so.

“It’s the same. It will be like I’m in prison,” she said. “What I know is, I did not do anything wrong. I did not steal anything. I did not get anything.”

Businessman William S. Go, one of six people under investigation for the alleged money laundering, said in an affidavit submitted to the NBI that Deguito had told him that two bogus accounts had been set up at her branch to handle a large US dollar remittance coming from Bangladesh that was converted into pesos with the approval of the RCBC head office.

RCBC president and CEO Lorenzo Tan has denied knowledge of the scheme.

“I condemn as malicious and actionable insinuations that the top management of the bank knew of and tolerated alleged money laundering activities in one branch,” Tan said in a statement to the Inquirer earlier this week.

“I will fully cooperate with all ongoing inquiries and believe that I and consequently the bank’s management will be fully vindicated,” he said.

Offer to go on leave

On Friday, Tan’s lawyer Francis Lim said Tan had offered to go on leave to give the bank a free hand in investigating the alleged money laundering.

“The bank’s board thanked him for his gentlemanly and decent gesture but said their trust in him is intact and unshaken,” Lim said in a statement.

Deguito said she knew Go, but denied Go’s allegations raised through his lawyer Ramon Esguerra that she met up with the businessman and asked him to sign documents that would close his account at her branch.

She also denied offering Go P10 million, saying she did not have that kind of money.

Asked whether Go was lying, she said: “I will answer that in the Senate.”

Asked if Tan knew about the alleged money laundering, she said she assumed he did.

“I’m not accusing him. I will just assume, because this is a huge amount of money. It will be credited to the treasury of the bank before it gets credited to our branch,” she said.

Deguito said that apart from the $81 million “plus” that was credited to her branch, “there was a call (on Feb. 9) from the settlement department of the bank that there was an additional payment but they no longer credited it (in the Jupiter branch accounts) because they reportedly said there was a recall.”

Deguito said the money that was credited to her branch “went through the process.”

“I was not the one who credited that straight. There is a department at the head office that handles the remittance. So there’s a long process that needs to be followed before the money reaches my branch,” she said.

Deguito said she instructed her assistant to e-mail the remittance department for information about the source of the funds and what they were intended for.

“They did not call me. [The money] was just credited in the account. And now it’s all my fault,” she said.

The accounts were allegedly used to receive the funds from the Bangladesh bank that were to be transferred from its account in the New York Fed.

The accounts were later consolidated into one of Go’s accounts at Deguito’s branch and allegedly laundered through three casinos in Manila. With reports from Tina G. Santos and Nancy C. Carvajal