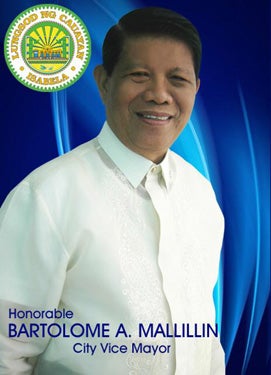 CITY OF CAUAYAN, Isabela—Vice Mayor Bartolome Mallillin of this city died on Friday from multiple internal organ failure at the Isabela United Doctors’ Medical Center here. He was 74.

A widower and a retired Philippine National Police official, Mallillin was serving his third and last term when he passed away. He is survived by his daughter Mariennette Mallillin-Coloma and son Allan Carlo.

Mallillin briefly served as city mayor when Mayor Benjamin Dy died in 2013 due to emphysema. He launched a campaign on environmental protection and led a drive against stray animals in the city.

He finished his elementary studies at the Cauayan North Central School, secondary education at Isabela Colleges and tertiary education at Far Eastern University in Manila. He later joined the Philippine Constabulary-Integrated National Police (PC-INP) and later the PNP.