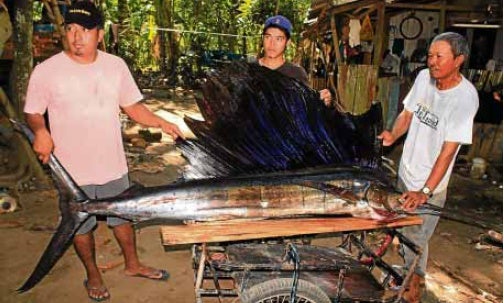 LOST BOUNTY Fishermen have noticed that even the hardy swordfish is now hard to find in Iligan Bay in Mindanao because of El Niño. RICHEL UMEL/INQUIRER MINDANAO

SANTA  CRUZ, Davao del Sur—Fisherman Virgilio Abe could only shake his head in dismay while staring at his banca and its load of only 4 kilograms of fish.

“This is a far cry from the 15-kilogram daily average I had before the dry spell,” Abe, 46, a father of three and a resident of Barangay Poblacion here, said in the vernacular.

In his small motor-driven banca, he would go to as far as Santa  Cruz’s fishing boundaries to seek a better harvest—only to return to shore with a just a third of what he used to catch.

“I think the fishes swim deeper these days because of the extreme heat. I could also not use a longer line for my net because it is prohibited,” he said.

A fisherman from Barangay Bato, who gave his name only as Dodong, is struggling more than ever.

He did not own a motorized banca and could fish just a few kilometers from the coastline of his village, particularly in the nearest coral reefs.

“It would be lucky if I can get 2 kilograms of fish,” Dodong said.

Species, such as grouper and parrot fish, have become scarce compared to last year’s, he noted.

“We used to catch about a ton by just sailing 27 kilometers into Davao Gulf,” Abdullah said. “Now, we could hardly catch 200 kilograms even if we sail farther.”

The 308,000-hectare Davao Gulf is considered one of the most diverse marine ecosystems in the world, according to the World Wildlife Fund (WWF).

It is Southern Mindanao’s major fishing ground and the 10th in the country where such species as sardines, tuna and mackerel thrive.

The Davao Gulf Management Council (DGMC) has considered the gulf “a critical resource supporting the economies of six coastal cities and 18 coastal municipalities.”

Like Abe, Abdullah blames the extreme weather condition, brought about by the El Niño phenomenon, for the dwindling catch.

“Fish species like cooler temperatures so they tend to go deeper into sea or migrate to colder areas when the temperature here gets hotter,” he said.

In January, the Bureau of Fisheries and Aquatic Resources (BFAR) projected that at least 100,000 fisherfolk in 58 provinces will suffer from the effects of  El Niño.

In its mitigation plan, it said the rise in temperature in the Pacific Ocean could drive down the country’s annual fish catch by 20 percent.

The BFAR also urged fishers to find alternative sources of livelihood as the situation continues to get worse. It has earmarked at least P673 million from its 2016 budget to fund measures to mitigate the effects of El Niño on the domestic fishing industry.

Like the Sta. Cruz fishermen, Ricardo Rabaya Jr., 48, of Barangay Poblacion in Linamon, Lanao del Norte province, could only scratch his head.

Iligan Bay, one of Northern Mindanao’s major fishing grounds, has lost its bounty.

Rabaya said he would be lucky to catch swordfish these days, even when he would sail more than 10 km from the shoreline.

Swordfish (Xiphias gladius) is among fish species known to be heat tolerant and can thrive in waters with a temperature of 27 degrees Celsius. It is highly migratory and would move toward areas with lower temperature.

Rabaya said the effect of the extreme weather condition was also being aggravated by pollution and dynamite fishing at Iligan Bay.

Abdullah noticed the decrease in fish catch at Davao Gulf as early as January, but the situation started to worsen in February.

Prices of marine products have spiked in public markets in Davao del Sur due to low supply.

Sta. Cruz Mayor Joel Ray Lopez said the recent declaration of the state of calamity could also speed up assistance to the fishermen.

“We are finding ways to lessen the suffering of our fishermen and our farmers,” he said.

For Mayor Rommel Arnado of Kauswagan, Lanao del Norte, the local government, in coordination with the BFAR, will be distributing fish cages, floating devices (payao) and fingerlings to boost the fish stock in the town’s coastal areas.

In the meantime, fishermen have to contend with the dwindling catch as government-run weather forecasting agencies project the dry spell to probably extend beyond the wet months.

The Australian Bureau of Meteorology said that while climate indicators showed that El Niño could be weakening, the return to neutral conditions could yet happen in the second quarter of the year.