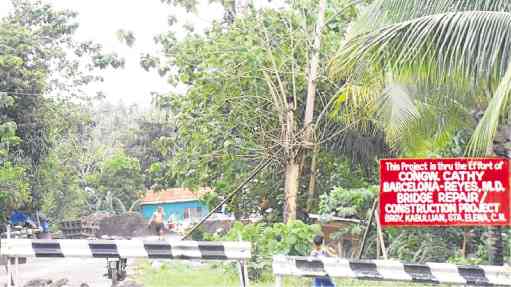 THESE billboards, showing the names of politicians claiming credit for various infrastructure projects, have been put up along project sites in Camarines Norte province. JUAN ESCANDOR JR./ INQUIRER SOUTHERN LUZON

DAET, Camarines Norte—After noticing the proliferation of billboards crediting politicians for various infrastructure projects in Camarines Norte province, the Department of Public Works and Highways (DPWH) has asked these officials to dismantle these and warned them of sanctions.

The order states that “names and/or pictures of any personages should not appear in the billboard.”

Doloiras said the DPWH had sent Camarines Norte Rep. Catherine Reyes, who is running for governor under the Liberal Party (LP), a letter informing her of the violation. The letter, he said, also asked Reyes to dismantle the billboard in Sta. Elena town.

But Reyes, in a text message on Thursday, defended the billboards, saying these are “in pursuance of my responsibility to inform my constituents of what I have done and doing to improve flow of commerce and industry in the first district.”

“Likewise, considering that the [Commission on Elections] itself has publicly announced that during the precampaign period, we’re not yet covered by prohibitions, I find it lawful to keep the people informed that their congresswoman has been working to serve public interest and live up to my oath of office,” she said.

But Doloiras is cautious on the enforcement of the DPWH order, saying he wanted to be careful because it is the election period and he did not want his actions misinterpreted by politicians.

He said Reyes is the rival of reelectionist Gov. Edgardo Tallado, former LP chair of Camarines Norte who was removed from the party last year. Tallado is seeking another term under the Nationalist People’s Coalition.

Doloiras said he was told that Reyes’ camp would send his office several photographs of billboards bearing her rival’s name to show that he had violated the DPWH order.

Tallado, in a telephone interview, said he has no billboards in DPWH project sites.

But he admitted that some projects that the provincial government has implemented, through partnerships with different agencies, were accompanied by billboards bearing his and other officials’ names.

Doloiras said the DPWH would dismantle these billboards if the politicians would not heed their appeal. Juan Escandor Jr., Inquirer Southern Luzon 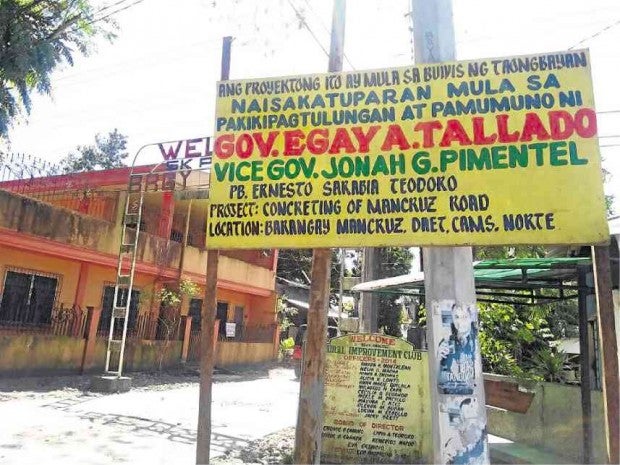