Japan still searching for the missing, 5 years after tsunami 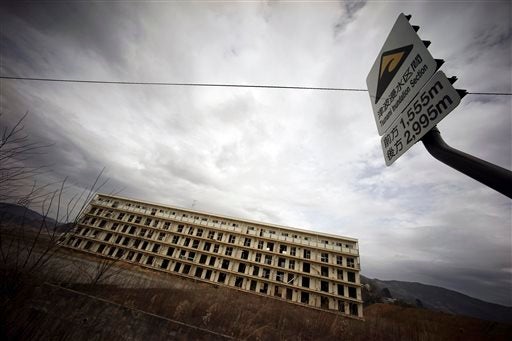 In this Monday, March 7, 2016 photo, the ruin of a residential building damaged by the March 11, 2011 earthquake and tsunami still stands near the sign of a tsunami inundation section in Rikuzentakata, Iwate Prefecture. The five-story building is one of legacies that still stand in northern Japans coastal towns, five years after the disaster that killed more than 18,000 people. (AP Photo/Eugene Hoshiko)

RIKUZENTAKATA, Japan — The Japanese coast guard resumed underwater searches this week for some of the more than 2,500 people still missing from the 2011 earthquake and tsunami that devastated the country’s northeast coast.

Six divers entered Hirota Bay in near-freezing temperatures Thursday in a search that was resumed temporarily at the behest of surviving families in the city of Rikuzentakata.

As reconstruction of the disaster-hit region gains pace, stretches of the bay have been reclaimed for building sea walls. Relatives fear that the remains of their loved ones might be buried forever.

“Some people say to me, do you really want to latch onto this forever?” said 81-year old Chikara Yoshida, who lost his only son, a 43-year-old volunteer firefighter who was trying to help elderly residents escape.

“But for me, as I approach the end of my life, I want to bring him back in any way I can,” he said. “It doesn’t matter which piece of him comes back. Then I can end my days.”

Yoshida and his daughter led a petition drive through Facebook earlier this year to resume underwater searches. The response was overwhelming. In just three weeks, 28,140 signed from Japan and abroad.

The coast guard heard about the petition and asked families in Rikuzentakata what it could do. They asked for searches in areas where divers have told them objects tend to accumulate, thinking these are where they might be fruitful. 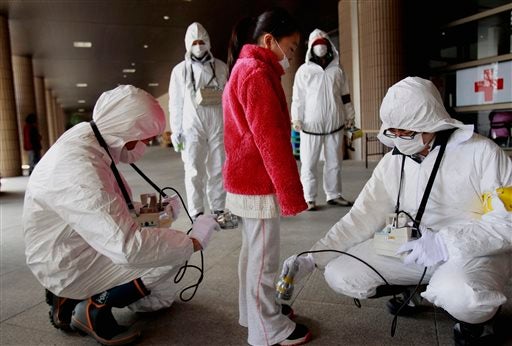 In this March 24, 2011 file photo, a young evacuee is screened at a shelter for leaked radiation from the tsunami-ravaged Fukushima Dai-ichi nuclear plant in Fukushima, northeast of Tokyo. AP

The coast guard searched waters off Minamisanriku on Wednesday and plans to search another area off Rikuzentakata on Friday. So far, it hasn’t found any remains. Thursday’s effort turned up only a bicycle. Further searches are not planned.

Some families rented their own boat to see watch the search, and tossed flowers into the bay.

“I’ve waited so long for this,” said Yoshida’s wife, Eiko. “Now to finally be able to get on this boat. The tears won’t stop. I felt that I could see my son again.”

A total of 2,561 people remain missing, according to the National Police Agency, including more than 200 in Rikuzentakata. Nearly 16,000 have been confirmed dead, bringing the presumed death toll to more than 18,000.

The petition was submitted to Rikuzentakata officials in early March, in hopes that local police would also resume searches. Searches have tapered off in recent years as authorities focus resources on reconstruction.

After the disaster, Yoshida heard that his son Toshiyuki had gone to the municipal office immediately after the magnitude-9.0 earthquake to help carry the elderly to higher ground, one by one, before the tsunami came. He rescued two people and disappeared when he went back for a third. 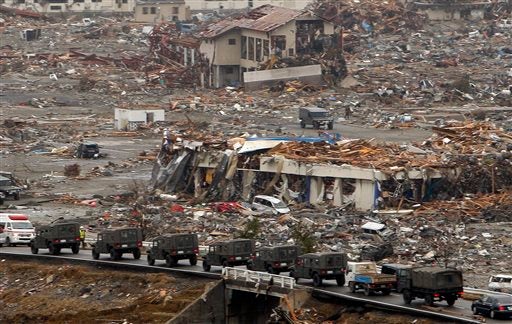 Day after day for more than a year, Yoshida went from morgue to morgue looking for his son. Eventually, he filed a death certificate and held a funeral. With nothing to bury, he put a baseball inside the urn. Toshiyuki coached children in the sport that was his favorite.

His absence still haunts Yoshida. He wonders whether he is to blame for teaching his son to put the interests of others first.

If they could talk again, “I would just say, ‘well done’ or maybe ‘come back.’ . But rather than come back, I would really just like to tell him, ‘Well done.'”

Mementos of his son remain in the living room: his baseball jacket and cap hang on the wall; a glass of his favorite “shochu,” a Japanese liquor, at the family altar; and a large framed certificate from the government acknowledging Toshiyuki’s bravery. A certificate he will never receive in person. TVJ