But sanctions to take effect after his term
By: Nancy C. Carvajal - @inquirerdotnet
Philippine Daily Inquirer / 12:01 AM March 10, 2016 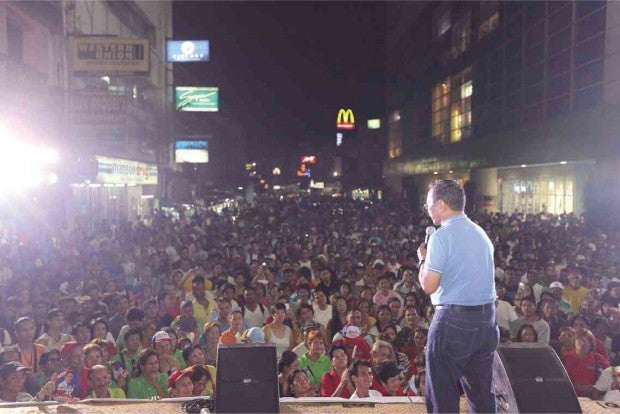 The Commission on Audit (COA) has recommended sanctions against Vice President Jejomar Binay in connection with the alleged anomalous construction of the P2.8-billion Makati City Hall Building II, according to a special audit report.

The 148-page report by the 12-member COA team against Binay, who is running for President in the May 9 elections, said the Vice President was administratively liable for grave misconduct, dishonesty and gross inexcusable negligence, graft and corrupt practices.

The charges concerning crimes that Binay allegedly committed while he was mayor of Makati City carry penalties ranging from removal from office, fines and imprisonment.

However, Binay, as a sitting Vice President, is immune from lawsuits and the charges against him can only be prosecuted after he steps aside.

The report, a copy of which was secured by the Inquirer, said that Binay should be meted out administrative disciplinary action for violation of COA circulars and memorandums as the head of a procuring entity from 2007 to 2010.

Also named in the special audit report, forwarded to the Office of the Ombudsman for prosecution, were Binay’s son, Junjun, who has been removed as mayor of Makati in connection with construction irregularities in the city,  and 54 former and current officials in the municipality.

“Any unjustified failure of the officials and employees concerned to comply with the requirements herein imposed shall be subject to the administrative disciplinary action provided in Section 127 of Presidential Decree No. 1445; Section 55, Title I-B, Book V of the revised Administrative Code of 1987 and Section 11 of Republic Act No. 6713,” the report said.

The report stated that “the construction of the Makati parking building from Phase 1 to 5 totaling P2.8 billion showed irregularities from budgeting to procurement to execution resulting in the misuse of public funds.”

It also said that the grant of the city government of undue advantages to the privately owned Hilmarc’s Construction Co. and Mana caused injury to the government.

The audit team also found out that the contract for architectural and engineering services with Mana for P11,974,900 was not covered by an appropriation and was awarded through “simulated bidding.”

Payments, it said, were not supported by documents as required by law.

The recommendation by the special team was approved the Assistant Audit Commissioner Alexander B. Juliano.

Among anomalies cited by the team were programs not included in the annual procurement plan (APP); the supplemental budget of P2.55 billion was enacted without available funds; the purported public bidding on the five phases as bases of award of contracts were not an outcome of a competitive bidding; the original project of a nine-story parking building with cost of P283 million was upgraded to 11 floors with bloated cost of P2.28 billion without an approved plan and approved budget cost; reported accomplishments were paid without the required vital documents; the

The report said that the absence of the APP, which should have determined the extent and size of contract scopes, resulted in the construction and implementation of the parking building project into five phases without judicious planning and procurement.

The team refuted Binay’s defense that the responsibility for the bidding of the project was not with the mayor, but with the city’s bids and awards committee. It said that under the law “fiscal responsibility rests directly with the head of the agency concerned.”

The absence of an APP, an indispensable requirement for judicious planning and procurement, should have alerted Binay to do a more strict review and supervision of the project, it said.

The team said that the auditors assigned to Makati that reviewed the different phases of the project did not issue any adverse audit observation or notice of disallowance did not mean that the transactions were legal and regular.

On the case of the enacted supplemental budget, the team found out that the various infrastructure projects amounting to P14 billion of which the P2.8 billion pertains to the parking building were sourced from either loans, unappropriated surplus or savings of the executive budget and surplus income.

The audit team discovered that P1.24 billion and P2.3 billion representing proceeds of loans which were not released by state-owned Land Bank of the Philippines on 2007 and 2008 but on Jan. 29, 2010, an election period.