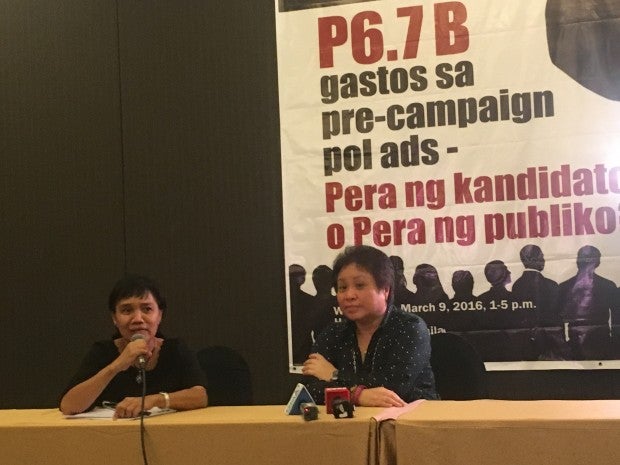 Bureau of Internal Revenue Commissioner Kim Henares on Wednesday urged candidates in the upcoming national elections to be transparent in their campaign spending, particularly in the donations they had been receiving.

Speaking before a forum by the Philippine Center for Investigative Journalism, Henares said candidates pushing for the freedom of information bill should walk their talk and bare their donors.

“You are in favor but in all of your donation you put ‘unknown,’ then you are not really in favor of FOI,” Henares told reporters at the Pera, Pulitika, Eleksyon 2016 forum at Hotel H2O in Manila.

Citing data from Nielsen Media, PCIJ reported that a total of 105,000 “social concern” ads worth P6.7 billion featured apparent candidates in the May polls from March 2015 to January 2016, ahead of the 90-day campaign period which started on Feb. 9.

The PCIJ also estimated that the candidates’ P6.7-billion pre-campaign spending could have provided 63,605 five-member families with their basic food and nonfood needs for a year; 23,103 permanent housing for victims of Supertyphoon “Yolanda”; 95,714,285 pairs of slippers for the poor, and 13,400 public school classrooms.

Casting doubts on the trustworthiness of secretive candidates, Henares said those seeking elective posts in the May 9 polls should be able to stand public scrutiny and be transparent as early as now.

“Nasa atin ‘yun. Ganito bang mga leaders ang gusto natin? If you can’t afford to let the light shine on you then there must be something wrong,” she added.

Happy to be replaced

Asked about the remarks of Vice President Jejomar Binay that she would be sacked as BIR chief should he win in the elections, Henares said she did not see any problem with being replaced.

In fact, Henares said she would be happy to be sacked, as government service was stressful and often thankless.

“But working in government, the gratification there is you are able to help your country, but there’s no gratification as in people thanking you. Most of the time people hate you, people complain … It’s a stressful situation,” she added.

Henares said being out of government service would clear her mind and conscience of many thoughts.

In at least two separate occasions last month, Binay vowed before Filipino-Chinese businessmen to sack Henares “within 30 minutes” should he win in the May presidential election. RC