Accompanied by his running mate Leni Robredo, Roxas went from one stall to another to greet vendors at Julian Pastor Memorial Market in Barangay (village) Cuta.

Roxas lost to Batangas native Vice President Jejomar Binay in this province during the 2010 vice presidential elections. But the incumbent Batangas governor, actress Vilma Santos, is a member of the Liberal Party and is backing Roxas and Robredo. She was earlier rumored to be one of the choices to become Roxas’ running mate.

READ: Roxas open to running with Vilma Santos in 2016

Some of the market vendors briefly stopped selling and left their stalls to see or get close to Roxas. 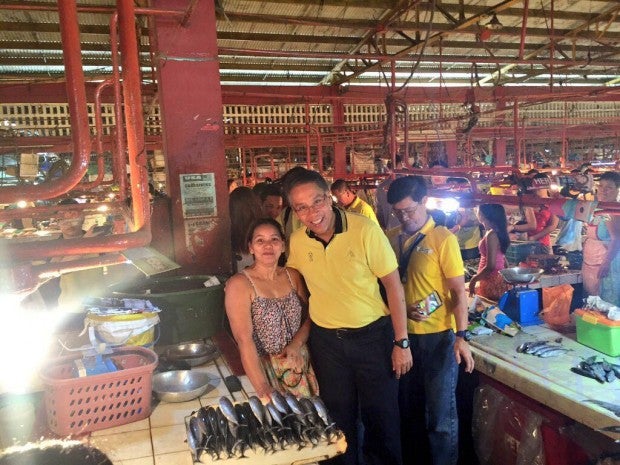 One of them, a 60-year-old man, joked: “Oh, ‘yung mga paninda niyo baka nawawala na kakahalik niyo kay Mar (Mind your items, they might be stolen already while you are busy kissing Mar)!”

Roxas shook hands with a middle-aged woman wearing a green top. The woman shyly said: “Sorry, naka-green ako. Pero maka-yellow din ako (I might be wearing green, but I am really for yellow)!”

A woman selling fish was surprised to see Roxas and told the presidential aspirant: “Ay, napakatangkad mo pala (I did not know you were that tall)!” eliciting laughter from Roxas, who said, “Ay, hindi naman po masyado; Hindi pwede maging (basketball) player (Not really; I cannot be a basketball player).”

After campaigning at the market, Roxas and Robredo proceeded to the Batangas City Sports Coliseum to join thousands of supporters in celebrating Women’s month. 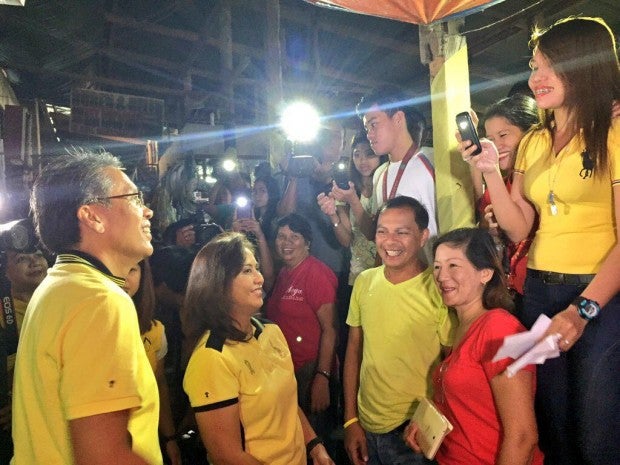 They will then have a dialogue with fisherfolks at Sitio Ilaya in Barangay Sta. Clara. Roxas and Robredo will present to them their plans to improve the livelihood of fishermen here.

At noon, Roxas and Robredo, joined by the senatorial bets of LP, will meet about 2,000 multi-sectoral leaders and beneficiaries of the Pantawid Pamilyang Pilipino Program (4Ps) at the Tanauan Institute in Tanauan City, Batangas. IDL

Read Next
Prayers, cheers as total eclipse darkens swathe of Indonesia
EDITORS' PICK
Duterte warns of possible lockdown if ‘more aggressive’ Delta variant spreads
Hidilyn Diaz wins weightlifting gold in Tokyo Olympics
Tips for a cheerful life
Harnessing technology for quality education
Duterte: When I said I will fight drugs in 6 months, I thought it was like in Davao
Connect to PH’s fastest network with new Signature Plan Lite at only P599 per month
MOST READ
Hidilyn Diaz wins weightlifting gold in Tokyo Olympics
Hidilyn shoots not only for gold but also for permanent place in PH sports history
Go to war with China over West PH Sea? It will be a ‘massacre’, says Duterte
Duterte acclaims Sotto: ‘He can become a good vice president’
Don't miss out on the latest news and information.