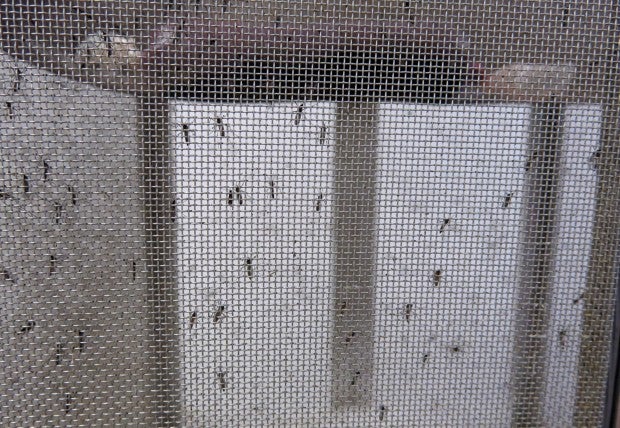 In this Feb. 24, 2016 photo, Aedes aegypti mosquitos are bred for Zika related testing at the dengue lab run by the Centers for Disease Control and Prevention (CDC) in San Juan, Puerto Rico. At a different lab on the island, CDC officials are breeding mosquitoes to determine if they are resistant to insecticides that Puerto Rico is using. AP

PARIS, France — Suspected of causing brain damage in babies and a rare neurological ailment in adults, the Zika virus was linked by researchers Tuesday to a third disorder: paralysis-causing myelitis.

French experts reported that a 15-year-old girl diagnosed on the French Caribbean island of Guadeloupe with acute myelitis in January had high levels of Zika in her cerebrospinal fluid, blood and urine.

“This is the first published case to offer proof of a link” between myelitis and the virus sweeping Latin America and the Caribbean, Annie Lannuzel of the University Hospital Center Pointe-a-Pitre in Guadeloupe told AFP.

The case had been described in a report published by The Lancet medical journal.

“Until recently, Zika was thought to cause benign infections in humans,” Lannuzel and a team wrote in the case report.

Instead, the “presence of Zika virus in the cerebrospinal fluid of our patient with acute myelitis suggests that this virus might be neurotropic” — something that attacks the nervous system.

The mosquito-borne virus usually causes mild symptoms in adults, with a low fever, headaches and joint pain, but the virus’ quick spread has caused alarm due to an observed association with more serious health problems.

There have been fewer than a handful of reported cases of sexual transmission.

Last week, scientists said they had found the first evidence of a biological link between Zika and microcephaly, which causes severe deformation of the brains of unborn babies.

Laboratory tests found that Zika targeted key cells involved in brain development in the womb and then destroyed or disabled them, they said.

A separate study, also last week, offered evidence that Zika may cause Guillain-Barre, a rare condition in which the body’s immune system attacks a part of the nervous system that controls muscle strength.

Myelitis is an inflammation of the spinal cord which can affect limb movement and cause paralysis by interrupting communication between the spinal cord and the rest of the body.

Some patients are left with permanent damage.

There is no effective cure, and treatment general consists of cortisone injections in strong doses.

In the reported case, a teenaged girl was admitted to the Pointe-a-Pitre hospital with partial paralysis, limb weakness, and intense pain.

Other potential causes of myelitis were ruled out, including shingles, chicken pox, herpes and other viruses.

The girl’s condition has since improved and she is now out of danger, said the statement.

“My message is that Zika does not only affect pregnant women, and is not necessarily benign,” said Lannuzel.

The team underlined this was a single case, and “future studies will be needed” to determine wether Zika does indeed cause myelitis.

Brazil has been hardest hit by the Zika outbreak, with some 1.5 million people infected and 641 confirmed cases of microcephaly in children born to women infected with the virus while pregnant.

According to the World Health Organization, 41 countries or territories have reported transmission of Zika within their borders since last year, and eight have reported an increase in Guillain-Barre cases.

A rise in microcephaly and other baby malformations has so far “only been reported in Brazil and French Polynesia”, according to the WHO, which has declared this a health emergency.

There is no vaccine or treatment for Zika.