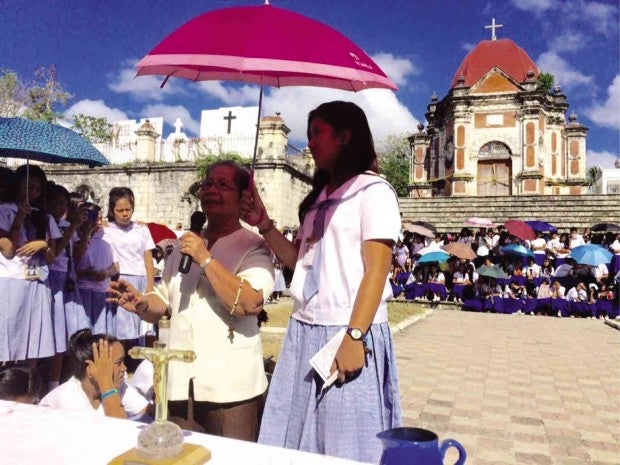 RESIDENTS of San Joaquin, Iloilo province, gather and pray before Campo Santo at the town’s cemetery where suspected treasure hunters dug a hole inside the mortuary chapel in this photo taken from the Facebook page of Fr. Joselito Sarabia.

SAN JOAQUIN, Iloilo—Parishioners wept during Mass on Feb. 28 when it was announced that their priest, Nelson Silvela, had been relieved from his post by the Jaro Archdiocese.

“They were still in pain but at the same time relieved,” said Fr. Joselito Sarabia, a native of the town and director of St. Vincent Seminary in Quezon City.

Two days before Silvela’s relief, police filed a criminal complaint against him and 10 men believed to be treasure seekers for digging a 18.29-meter-deep (60-foot-deep) hole under Campo Santo, a 19th century-mortuary chapel at the municipal cemetery. The sites are among the cultural properties declared national cultural treasures by the National Museum of the Philippines.

Cultural properties “possess outstanding historical, cultural, artistic and/or scientific value, which is highly significant and important to the country.”

Police arrested the 10 men on the night of Feb. 24 while digging inside the chapel after a resident reported their presence there. Witnesses, including a barangay chair and the cemetery caretaker, pointed to Silvela as the one who supported or directed the activities.

The men worked from 7:30 p.m. to 4 a.m. and rode on a white Nissan Urvan to the cemetery. They were brought to the convent after their work, according to witnesses.

“Father Nelson told me that if anyone asked about the digging, I would refer the questions to him,” the cemetery caretaker, Baltazar Savari, said in Hiligaynon.

Silvela also offered him to join those working at Campo Santo for P200 per day, but the caretaker refused.

The priest has not been seen since he left the parish a few days after the workers were arrested. He has not issued any statement or responded to phone calls and text messages from the Inquirer.

The statement stressed that Lagdameo did not authorize any digging activities at Campo Santo.

Police filed the complaint against Silvela and the workers in the Iloilo Provincial Prosecutor’s Office for violation of the National Cultural Heritage Act of 2009 (Republic Act No. 10066). The penalty includes at least 10 years imprisonment or a fine of P200,000, or both.

Campo Santo is a source of pride of residents of San Joaquin, a town of about 50,000 and 54 kilometers from Iloilo City.   It is also a top tourist attraction in Iloilo, according to the municipal tourism officer, Arlene Alunan.

Fr. Mariano Vamba, the last Augustinian parish priest of the town, initiated the construction of the cemetery and the hexagonal-shape mortuary chapel in 1892.

The Baroque-style chapel is on top of the concrete staircase from the lower level of the cemetery. The walls are made of coral stones and red bricks and its interior adorned with carvings of flowers and leaves.

Buried in the walls are the remains of priests and members of prominent families of San Joaquin.

The digging is the first confirmed treasure-hunting activity in a structure that has been declared a national cultural treasure, according to Angel Bautista, assistant director of the National Museum of the Philippines.

The arrested workers said they did not find any treasure, claiming that they were hired only days earlier to backfill the hole. But the cemetery caretaker, Savari, said some of them had earlier told him they found gold nuggets.

The claims could not be verified as the detainees gave limited information to the police. Some initially gave false names to the investigators.

Sarabia said the treasure hunters might have assumed that precious items or treasures could be buried under Campo Santo along with the remains of those belonging to prominent families.

Bautista said the digging on the floor of the structure severely weakened its foundation. The workers had dug under the northern wall of the mortuary chapel, reaching even below the cemetery.

The damage was considerable because Campo Santo was among the few cultural structures that were intact or had not been damaged, undergone major revisions or reconstruction, said Ernesto Toribio Jr., head of the National Museum’s treasure-hunting section. 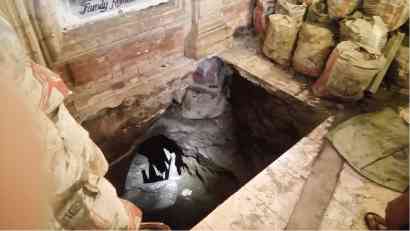 The National Museum is still assessing the extent of destruction and the need for immediate repair and restoration.

More than the structures, however, the digging has ruined much more. “The graves of our loved ones were violated and desecrated. How can they do such a terrible thing?” said the Purok Uno village councilor, Elsie Serrato.

The remains of her husband, Amado, parents and other relatives are buried in the cemetery.

“We consider the cemetery sacred. I attend Mass regularly and I did not imagine that this could happen and I am confused that a priest would do this,” she said.

Retired international teacher Corazon Alcalde, 76, said some parishioners had been going to Mass in the neighboring town of Miag-ao, disheartened by the actions of Silvela.

Napoleon Secondes, village chief of Purok Uno, said the priest had told him that the men were working on a “project” inside Campo Santo. “I did not question and mind it because he was our parish priest,” he said.

Several residents said the digging activities started in December last year. But more became suspicious because these were done at nighttime, and the loosened soil and other debris were dumped over or between tombs.

Villagers suspected that Silvela did not act alone. “Who were behind the treasure hunting? Why was [Silvela] so brazen to pursue this?” Sarabia asked.

He urged investigators to probe deeper than ever to determine the identities of all those involved.

“We did not know about it. Only Father Silvela can shed light on who may be responsible,” he told the Inquirer.

“We will help in upholding the law. If the law has been violated, we will cooperate with the justice system,” he said.