Trump or Cruz? Republicans face up to growing dilemma 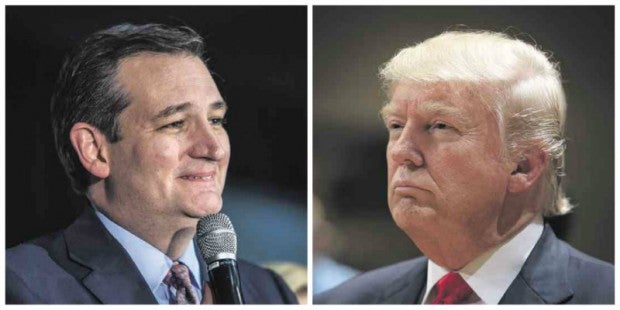 WASHINGTON, United States — With Donald Trump steaming ahead in the race for the Republican presidential nomination and Ted Cruz consolidating his second-place status, the party establishment is facing up to the real possibility of having to embrace what some consider the lesser of two evils.

That could mean backing Cruz — the ultra-conservative Texas senator once reviled by fellow Republicans as a “wacko bird” eager to shut down the US government — at the expense of Marco Rubio, the establishment hopeful who is lagging in third place and facing calls to give up.

READ: Cruz sells yoga mats after admonishing Trump to ‘breathe’ | Anxious to slow Trump, both Rubio and Cruz go after him

Senator Lindsey Graham summed up the growing Republican dilemma in this most unpredictable of nomination contests on Sunday when he told NBC’s Meet the Press that there was “some hope with Ted, no hope with Donald” in a general election.

“If Ted’s the alternative to Trump, he’s at least a Republican conservative,” said Graham.

“If Donald Trump’s the nominee, the Republican party will get killed, will get creamed, we’ll deserve it,” warned Graham, a hawkish Republican who shelved his presidential campaign in December after failing to gain traction.

Trump, a billionaire real estate mogul who has never held elected office, kept a firm grip on his lead in the Republican race for the White House on Sunday and Cruz emerged as his strongest challenger in weekend primaries.

It capped a stormy week in which panicked Republican grandees trained their big guns on Trump, who has galvanized disaffected voters with an anti-immigrant, anti-free trade campaign filled with insults, attacks on minorities and mockery of the political establishment.

What has been an at times ill-tempered and deeply personal contest could yet plunge into deeper acrimony: there is a chance that no candidate will rack up the 1,237 delegates needed to secure the nomination before the Republican convention in July.

That would mean a contested or “brokered” convention, a scenario that could turn chaotic, especially if establishment figures seek to prevent delegates from coalescing around Trump.

‘Not the real deal’

When a candidate emerges from the Republican primaries with a majority, convention delegates do little more than rubber-stamp the voters’ choice. But when no candidate secures an outright majority, delegates have the final word on the choice of nominee.

In three-quarters of US states, the delegates who travel to the Republican convention to represent, say, Trump are picked among party activists without input from the candidate.

Delegates are told how to vote on the first nominating ballot. But after that, if voting goes to a second round and beyond, most are free to make their own choice — and potentially reshuffle the deck.

That is how — in a scenario party leaders still say is unlikely — Trump could head to the convention with a lead in the delegate count and still lose the nomination.

The 2012 Republican White House nominee Mitt Romney let loose on Trump last week, branding him “a phony, a fraud,” signaling what promises to be the opening salvo in a sustained party campaign against Trump.

Romney has yet to throw his weight behind any candidate, but should do so after March 15, the next major round of voting in the primary race.

Cruz, Kasich and Rubio were all “true Republicans,” he told NBC on Sunday.

“They’ve demonstrated over time that they share conservative values. There’s some differences on policy or on tactics to implement policy, but I’d be very proud having any one of them at the top of the ticket.

“Donald Trump on the other hand is someone who represents something entirely different. And in my view is not at all the real deal.

“This is a guy who pretends to be one thing and is something else entirely.”

The next date on the electoral calendar is Tuesday, when Michigan and Mississippi have Democratic and Republican primaries.

Republican-only nominating contests also are being held that day in Idaho and Hawaii.

Trump has called for Rubio to end his presidential bid and dismissed the Romney-led attack on him.

“I would love to be able to take on Ted one on one,” Trump said in Florida, minutes after winning in Kentucky on Saturday. “That will be easy.”

Cruz also urged Rubio and Ohio Governor Kasich to drop out, arguing that the anti-Trump vote will be split as long as they remain in the race.