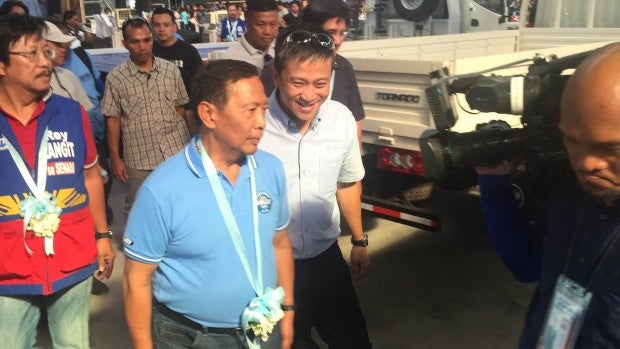 In an ambush interview after his campaign sortie at Foton Manufacturing Plant here on Monday, Binay denied Ombudsman Conchita Carpio Morales’ claims that Binay is bent on delaying the release of the audit report covering the alleged plunder activities surrounding the construction of the P2.2 billion car park building when Binay was mayor.

The Ombudsman accused Binay of pleading to his insiders in COA to delay the release of the audit report until after the May 9 elections.

On Saturday, the United Nationalist Alliance (UNA) president Toby Tiangco accused the Ombudsman of pressuring the COA to release its incomplete audit on the car park building.

Citing COA insiders, Tiangco said Ombudsman Morales “personally called up a ranking COA official prior to her trip abroad demanding that the audit report should be released immediately.”

Tiangco said the report would be used to file plunder charges against the vice president.

Binay has earlier filed a P200-million damage suit against Morales “for repeatedly spreading allegations of plunder, graft and corruption and other illegal activities against him based on unverified and even fabricated sources, and despite the fact these have not been proven in court.” The Philippine Daily Inquirer is a respondent in the damage suit.

On the other hand, Ombudsman in a statement turned the tables on Binay who it accused of pleading with his insiders in COA not to release the report.

“The Press Release from UNA is a lie. It was the COA that advised the Office of the Ombudsman months ago that the report was ready and that a copy will be transmitted to the office by the end of January. But according to a very reliable source VP Binay pleaded with a COA official not to release the report until after the elections,” the Ombudsman said.

“After failing to transmit in January, COA again informed the office that they will transmit a copy on February 22. Failing that as well, they again advised they will tran​smit it on March 2. So far no report has been received,” it added.

Earlier, the Ombudsman indicted Vice President and his son dismissed Makati mayor Junjun Binay for malversation, graft and falsification of public documents for allegedly rigging the procurement of the Makati car park building. The Ombudsman formally filed the graft and falsification charges against Junjun, while it would file the charges against the vice president when his immunity expires at the end of his term.