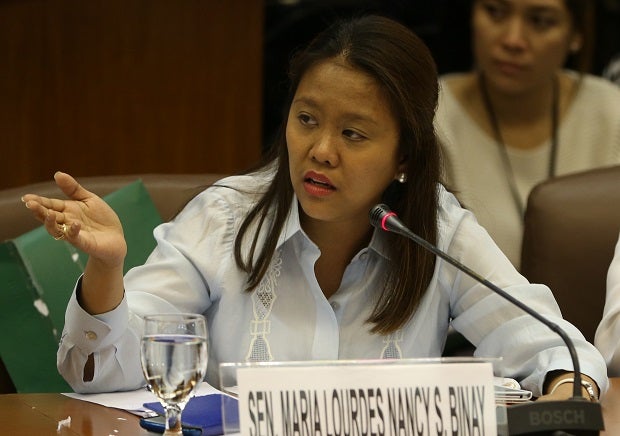 Senator Nancy Binay on Monday questioned the gambling activities of former Makati vice mayor Ernesto Mercado which she said might have been funded by the ruling Liberal Party (LP).

In an interview with reporters at the Royce Hotel and Casino in Clark, Pampanga, Binay said that she suspected Mercado of gambling with money paid by the LP to smear the reputation of her father Vice President Jejomar Binay.

On Monday, a yellow-clad Mercado was spotted at the campaign sortie of LP bet Mar Roxas at the coliseum in Makati, a known stronghold of the Binay clan.

Sought for her reaction, the lady senator said Mercado could be rubbing elbows with the LP to replenish his gambling funds.

Binay made the statement after she caught Mercado on Saturday coming out of the Royce Hotel and Casino flanked by his security aide from the Witness Protection Program (WPP).

The Inquirer reported that Mercado lost up to P300,000 in one casino alone.

A Binay ally former Candaba mayor Jerry Pelayo also saw Mercado coming out of the Widus Hotel and Casino after gambling in Royce.

Mercado, then Makati vice mayor, turned his back against the Binays after a falling-out with the vice president when the latter chose his son Junjun to run in his stead in 2010.

Binay questioned how Mercado was able to gamble when the latter even broke down in tears over his financial woes since he turned state witness against the Binays over allegations of kickbacks from various infrastructure projects since the vice president was Makati mayor.

Mercado also testified in a Senate Blue Ribbon subcommittee panel which recommended the filing of plunder charges against the Binays.

The senator said Mercado’s gambling spree while under government protection may have been funded by the administration party, especially because his daughter is running under LP.

Mercado’s daughter Karla Mercado is running as vice mayor of Makati with Makati mayor Kid Peña, who was earlier vice mayor until he replaced Vice President Binay’s son Junjun when the latter was dismissed by the Ombudsman over allegations of rigging the purportedly overpriced Makati car park building.

Mercado was caught casino-hopping on the eve of the campaign sortie in Pampanga of Binay’s United Nationalist Alliance.

Read Next
Ex-INC minister who accused sect leaders goes missing — lawyer
EDITORS' PICK
Smart celebrates all kinds of ‘#SimplyLove’ for Pride Month
Duterte to issue memo on face shields this week
Smart brings KCON:TACT especially 4U to subscribers from June 19 to 27
Gilas out to prove Korea win not a fluke; Tab fires back at ‘lucky shot’ remark
DOH reports 40 more COVID-19 variant cases
Young, Huerter help Hawks upset top seed Sixers in Game 7
MOST READ
Duterte to issue memo on face shields this week
No plot to oust Pacquiao as PDP-Laban president in July meeting — Nograles
Probe troll farms, lawmakers urge
Año: Drug war to be effective no matter who next leaders are
Don't miss out on the latest news and information.