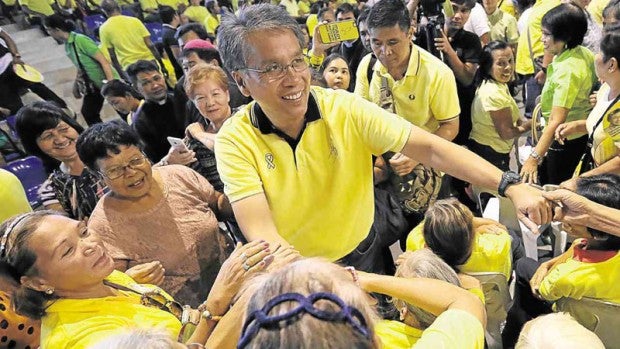 THE GOVERNMENT should address the troublesome and snail-paced Internet in the country once and for all, Liberal Party (LP) standard-bearer Mar Roxas said over the weekend.

In a dialogue with executives and employees of call centers in Alabang, Muntinlupa City, the Wharton-bred technocrat was completely in his element.

Roxas shared his experiences during the infancy of the business process outsourcing (BPO) industry that he helped develop as trade secretary in the Estrada administration.

“I feel really (flattered) that you’re thanking me. But I think the smartest thing that I did in those days was to wheel out,” Roxas told his audience, among them, pioneers in the BPO sector.

He expressed confidence the industry, which provides steady income for more than 1 million Filipinos, would produce another 1 million jobs under his presidency.

“I’m absolutely certain about that. Why? Internationally, the pressure to cut costs is not just incessant, it is accelerating. So, globally, that dynamic is going to lead companies to look for places where they can deliver the service at less cost,” he said.

Reacting to a question from a call center agent, Roxas said he himself found the problem of slow Internet connection annoying and a bane to the country’s ambition of becoming a global investment and IT hub.

“I feel your pain because I go through the same frustration in my home as well,” he said. “What are we gonna do? For me, it’s a very, very simple matter of truth in advertising.”

Instead of claiming to offer “up to” certain upload and download speeds, he said the government should order the telecommunication companies to disclose the “guaranteed minimum of speed” of their Internet service.

“‘Minimum of’ means that so many hours of the period must be at that rate. And then you penalize the firms when they’re not able to deliver,” he said. Marlon Ramos