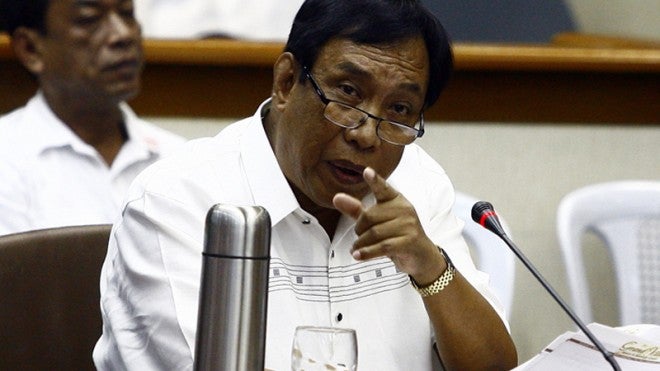 MACABEBE, Pampanga—Under heavy guard, former Makati Vice Mayor Ernesto Mercado went casino hopping at the Clark Freeport Zone over the weekend and was hit by a double whammy—he reportedly lost heavily and ran into his nemesis, the family of Vice President Jejomar Binay.

The husband of Sen. Nancy Binay spotted Mercado—a key witness in the graft and plunder complaints filed against the Binays—leaving one casino hotel at Clark on Saturday on the eve of a scheduled two-day campaign sortie in Pampanga of the Vice President’s United Nationalist Alliance coalition.

Senator Binay said her husband saw Mercado on the driveway while the couple were in an elevator.

A source from Binay’s camp said the incident happened at the Royce Hotel.

A few hours later, Mercado was seen leaving the Widus Hotel and Casino, this time by former Candaba Mayor Jerry Pelayo, a staunch Binay supporter. Mercado reportedly told Pelayo he was leaving for Manila because he had lost money at the casino.

Speaking to reporters, Nancy Binay said she had secured confirmation that Mercado had played at the casino. Mercado was there for only 30 minutes but “he lost big,” she said.

The senator declined to say how much Mercado lost. “For me, more than P50,000 is a big amount,” she said.

A source privy to Mercado’s visit to one casino said he lost P300,000.

Senator Binay said she would write the Department of Justice and demand an explanation for Mercado’s presence at the casinos while under government custody.

She said there had been complaints before that there were not enough funds for other WPP witnesses.

“And then you see a person under the protection program inside a casino,” she said. “Is it right for the government to spend funds for this kind of activities?”

Senator Binay said the DOJ should explain Mercado’s casino visits considering that NBI agents, being government officials, were barred from being entering casinos.

She also said the “people’s money” was used since the government provided Mercado with security personnel.

Pelayo said he saw Mercado at the Widus casino hotel at around 9:30 p.m. on Saturday and had a chance to speak to him as they were both waiting for their vehicles on the driveway.

He said he greeted Mercado and told him they had a mutual acquaintance, ostensibly referring to Vice President Binay whom Mercado has accused of illegally amassing wealth while he was mayor of Makati.

“(Mercado) said he lost at the casino and that was why he was on his way home,” Pelayo told reporters.

Pelayo said Mercado was surrounded by 10 heavily built bodyguards and they left in a Land Cruiser and an Innova. With a report from Nancy C. Carvajal