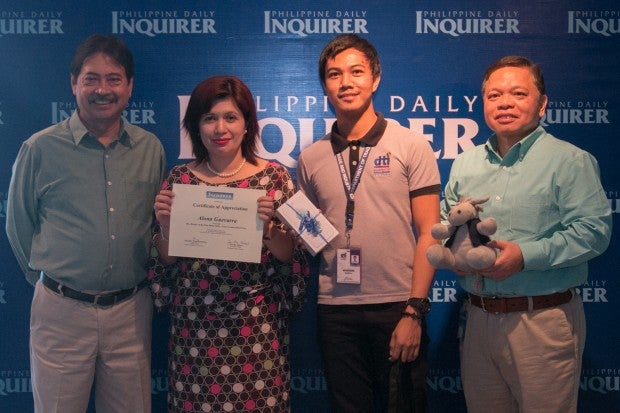 Thirty years may have passed since the 1986 Edsa People Power Revolution, but every Filipino alive today must continue to play a part in ensuring that the Edsa flame never dies.

This was the theme at the official awarding ceremony for the Inquirer essay-writing contest, “Be a Keeper of the Edsa Flame,” to commemorate the 30th anniversary of the first People Power Revolution.

The contest, which ran for two weeks, called on both “Edsa millennials,” or Filipinos between 15 to 35 years old, and “Edsa survivors,” or those 36 years old and above, to take a selfie and write a 500-word essay about People Power.

Millennials were asked what it was about Edsa that they wanted to know more about, while survivors had the task of writing on how they intend to pass on their experience to the next generation.

Alona Guevarra, a 40-year-old English teacher at Ateneo de Manila University, came up with the winning essay, and took home an iPhone 6S Plus.

In second place was Ma. Czarina A. Fernandez, 19, a third-year communication arts major at University of Santo Tomas. She got a certificate, a book and a Guyito doll.

In her winning essay, Guevarra wrote of how her generation had become complacent after Edsa, hence the current misconception that the martial law years were the “golden years” of Philippine history.

“Complacency is the enemy that blinded us Edsa survivors,” she wrote. “The 21st-century Filipino should battle complacency head-on through vigilance by maximizing the benefits of the information age. Learn as much as you can, speak your opinion, be heard.”

Accompanying Guevarra’s essay was a photo of her with her 19-year-old daughter, Ashley.

Asked what her message was for her daughter’s generation, Guevarra said she hoped they would understand that Edsa was more than just a four-day event in 1986.

“Edsa is a process. We shouldn’t just stop with the event, with the personalities and all. Edsa is a day-to-day occurrence, when we step out of the house, when we decide on what we should do and where to lead our lives,” she said.

“The spirit of Edsa is a process that we have to live,” she said.

Visit the Inquirer special site on the Edsa People Power Revolution at http://inquirer.net/edsa.

Do Filipino youth care about the Edsa Revolution?