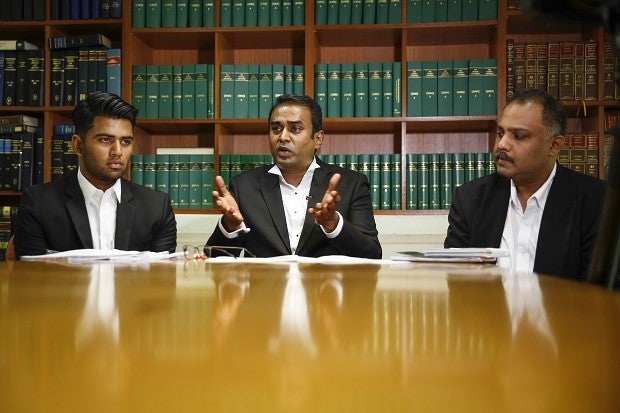 Lawyer Arunan Selvaraj, centre, flanked by his legal associates speaks to The Associated Press during an interview at his office in Kuala Lumpur, Malaysia, Thursday, Feb. 25, 2016. A Malaysian woman is suing Malaysia Airlines and the government for $7.6 million in damages over the loss of her husband on Flight 370, which disappeared mysteriously in 2014. The lawyers say more lawsuits are expected over the next few days ahead of a two-year filing deadline over air accidents set by a global aviation agreement. AP

KUALA LUMPUR, Malaysia — Families of 12 passengers on Malaysia Airlines Flight 370 have sued the carrier and the government, ahead of a filing deadline next week on the second anniversary of the plane’s disappearance.

The Boeing 777 carrying 239 flew far off course for unknown reasons after leaving Kuala Lumpur for Beijing on March 8, 2014. A global aviation agreement sets a two-year deadline for lawsuits by next-of-kin over air accidents.

READ: US official: Debris from same type of plane as MH370

Lawyer Sangeet Kaur Deo, who is representing 10 families, says the lawsuits involve a passenger from Russia, one from China and the rest from Malaysia. Another two lawsuits were filed by families of two Ukrainian passengers.

Sangeet said Friday her clients, who were engaged in settlement negotiations with the airline earlier, decided to sue because “nothing reasonable was forthcoming” from the carrier.